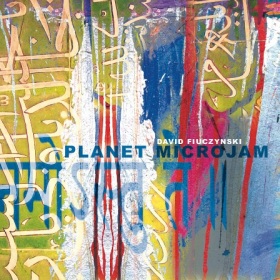 Guitarist and Berklee School of Music educator. David “Fuze” Fiuczynski has arrived at the global crossroads on Planet MicroJam - which  combines jazz harmony, ethnic folk melodies and a delicious groove. While drawing on the influence of classical composers and microtonal pioneers like Julian Carrillo, Alois Haba and Ivan Wyschnagradsky, Fuze adds in his own unique flavors, inherent sense of groove and improvisational daring on fretless electric guitar on this audacious and mesmerizing release on RareNoise Records.

“I’m trying to be the Gaugin of fusion,” says Fiuczynski, director of the Microtonal Groove Institute at the Berklee College of Music. “I very much think in colors. That’s a big thing for me. I want to create music that sounds like a Gaugin painting…an extremely colorful mix of Eastern and Western elements. And for me, the music on this new record is that.” From American Delta blues to the Arabic call to prayer, Chinese and Moroccan melodies, jazzy improvisations and funkified grooves, Fuze has concocted a tasty non-tempered gumbo on Planet MicroJam. Accompanied by current and former students in his program at Berklee (bassists Evan Marien and David Ginyard, keyboardists Evgeny Lebedev and Takeru Yamazaki, drummers Jovol Bell and Eric Kerr, violinist David Radler), the maverick guitarist stakes out unprecedented territory on this provocative new release, his eighth overall as a leader. Drum masters Jack DeJohnette and Kenwood Dennard appear as special guests on four tracks.

The album will be released on June 25th on CD and 24 bit-Flac digital download.

http://www.rarenoiserecords.com/
Posted by Jazz Chill at 10:44 AM