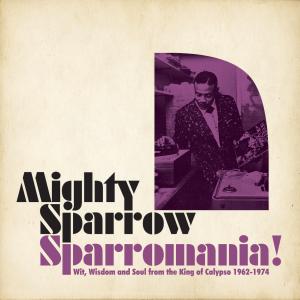 Strut present a brand new retrospective of one of the Caribbean’s most towering musical figures, Mighty Sparrow, covering 1962 to 1974. During a career of over 40 years, Sparrow has been an unmatchable figure in the world of calypso and a constant backdrop to Caribbean life, recording over 300 albums and winning eleven Calypso Monarch and eight Road March titles at the annual Trinidad Carnival during one of the most competitive times in its history.

By the late ‘50s and in his early 20s, he was already an influential figure, encouraging Trinidad’s people to pay taxes with Carnival hit ‘P.A.Y.E.’ and highlighting cruelty to animals on ‘Russian Satellite’. This new collection hones in on Sparrow’s most creative years as he effortlessly surfed musical styles from calypso party jams to hard-hitting boogaloo and soul.

The album also documents Sparrow’s fearsome live reputation with two firing tracks from a late ‘60s gig at the Barbados Hilton and excerpts from a ‘70s concert in Brooklyn featuring Sparrow’s dynamite backing band, The Troubadours, at the peak of their game. This is a long overdue retrospective placing Sparrow in his rightful position as a true Caribbean great, a cultural and social icon on a par with Fela Kuti in Nigeria or Miriam Makeba in South Africa. As journalist Ric Hernandez wrote in 1967, “It’s all there with Sparrow – wit, wisdom and an earthy irreverence for the established order. He sings life as he sees it, as one long boisterous contact sport.” ~ Strut Records
Posted by Jazz Chill at 1:17 PM