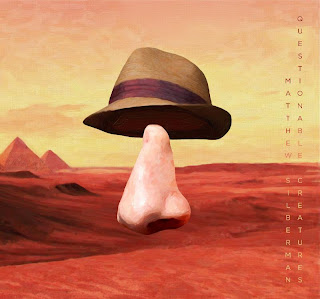 "Groove, noise, melodies, compelling improvising, and atmosphere; Matt Silberman's music has all the elements in place for a rich listening experience." - Mark Dresser

An Indiana Jones-like explorer dashing through an Egyptian tomb. A Midwestern hip-hop phantom. An elderly Eastern European woman speaking in tongues in a synagogue. Troops marching on the battlefield of daily life. A poet and writer creating waking dreams.

These are some of the Questionable Creatures whose stories Matthew Silberman tells on his debut album as a leader, available on September 11 on DeSoto Sound Factory (his personal imprint). The Brooklyn-based saxophonist/composer spins evocative yarns about these colorful characters as well as his own experiences moving from the seemingly infinite ocean vistas of Santa Monica, California to the claustrophobic cityscapes of New York.

The album's unique, eclectic sound can be traced to Silberman's wide-ranging influences, as well as his penchant for constructing elaborate narratives through his compositions. But its most direct source is the unusual make-up of Silberman's quintet, which features two guitarists along with the leader's tenor and a bass-drum rhythm section. Dueling axemen are a common sight on arena rock stages, not so much in jazz clubs.

"The classic jazz quintet is two horns, piano bass and drums," Silberman says. "But I was thinking of using one guitarist as another horn player and the other as a keyboard player. One is dealing a more with textures, chords and comping, the other more with playing lines and melodies."

The idea was partially inspired by Silberman's love of more forward-looking rock music, bands like Blonde Redhead, Sonic Youth, and Radiohead, who wield their guitars in the service of texture and atmosphere as much as crunching power chords and fluid melodies. The concept became a band after he'd met guitarists Ryan Ferreira and Greg Ruggiero.

"Neither of them are caught up in trying to match what all our peers are doing on the guitar," he says. "They both have a really strong voice and clear vision; they know what they're going for and keep working to achieve that. Greg has a beautiful sound, really melodic and singing. Ryan has an open and expansive quality to the way he plays. He creates so much around you without overwhelming the tonal palette. They both communicate their own individuality within the context of the music, which I really appreciate and respect. Getting to play different concepts with the two of them is amazing, beyond what I could have even imagined."

Both bassist Chris Tordini and drummer Tommy Crane were classmates of Silberman at the New School for Jazz and Contemporary Music, so they share a mutual history that shows in their empathetic interactions. "They're two of my favorite musicians to play with," Silberman says, "so combining them with the two guitar players was a dream band for me."

The quintet initially assembled in 2007, then reconvened after a long hiatus for a string of shows and rehearsals in 2011. At that point, Silberman recalls, "the music and our understanding of each other seemed to grow exponentially with every gig. The music became a living, breathing entity, and I was really excited to get into the studio."

It was important to Silberman to achieve this sort of cohesive group identity. The saxophonist had no interest in rushing out an album with his name on the cover or in tossing together an all-star band for the occasion. "I wanted a unique sound as a group, a band that really knew each other. A lot of people will get sidemen that are amazing players but haven't necessarily played together, and sometimes the results can be a little bit tepid or uninspired compared to recordings of people who have really developed some chemistry."

The chemistry between Silberman and his band mates is evident throughout Questionable Creatures. Ferreira's howling, distorted textures and Ruggiero's distant chiming combine with a bass line inspired by early Wu-Tang Clan and a Charlie Parker-esque melody to unearth the "Ghost of the Prairie"; the dancing rhythms and transcendent melodies of "Mrs. Heimoff" recreate Silberman's childhood impressions of an old woman's semi-schizophrenic aura, chanting in Hebrew, speaking to herself in Yiddish, and seeming to speak in tongues while davening at the end of the row in his childhood synagogue.

The strangely intoxicating "Dream Machine" was inspired by the iconoclastic poet, writer and artist Brion Gysin, a frequent collaborator with the legendary novelist William S. Burroughs. Gysin's "Dreamachine" was a device that projected flickering light patterns onto closed eyelids in the hopes of altering consciousness. He also pioneered the cut-up technique, wherein phrases were dissected and recombined to create new combinations and unexpected meanings. Silberman used that technique with four short melodies to create his piece.

The album's closing piece, "The Pharaoh's Tomb," is its most intense, and in Silberman's view reminiscent of an imaginary Spielberg action epic, chasing an adventurer or tomb raider through a booby trap-laden pyramid in search of ancient treasure. Action of another sort is captured in "The Battle at Dawn," where faint guitar drones fade like mist to reveal an introspective march rhythm, representing the inner battle between pursuing dreams and day-to-day drudgery.

"Breathe" looks back at Silberman's native California, pulsing with the rhythm of the ocean and seeming to depict a drive on L.A.'s Pacific Coast Highway. "Growing up so close to the beach, being right by the water, right on the edge of everything, there's almost a physical feeling that it applies to your body. It's the feeling you get looking out at the water as it spans all the way out to the horizon as opposed to buildings. I think that manifests itself in my music through a cross between the openness and infinity of Santa Monica versus the intensity and energy of New York."

Silberman was raised around music. His mother was an opera singer, while his father was a huge music fan who constantly played classic Motown around the house. Silberman began taking piano lessons at the age of six, then picked up the clarinet in the fourth grade. A few years later he switched to the saxophone and his fate was sealed. "As soon as I picked up the saxophone I just couldn't put it down. That was pretty much when I realized I wanted to play music for the rest of my life."

After graduating from the Los Angeles County High School for the Arts, Silberman took a year off to spend time with his family and to further hone his craft, but New York was always the goal. By the time he left L.A. he'd taken on two regular weekly gigs, frequented jam sessions regularly, and shared the stage with the great drummer Billy Higgins, as well as Nancy Wilson, the Clayton-Hamilton Jazz Orchestra, and Patrice Rushen.

Since arriving in New York, Silberman has played along a host of greats, including Roy Hargrove, as well as peers like Becca Stevens, Logan Richardson, Tyshawn Sorey, Nir Felder and Alan Hampton. While studying at the New School, he played in a live hip-hop band, and later played in rock bands (including one he describes as "Irish punk mixed with '80s synth-pop"), and a country-rock outfit, absorbing as many influences as he could.

"I think it was really good exposure to be in situations where you run into totally different skillsets than you do playing jazz," he says. "Being in such a tough, unforgiving environment as New York, I needed to figure out who I wanted to be as a musician."