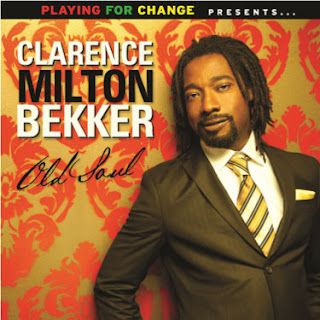 Producer Mark Johnson's Playing for Change: Songs from Around the World, released in 2009, established a forum for street musicians from around the globe, the invisible army of raw talent that exists outside the conventional margins of the music business. Among those raw talents was vocalist Clarence Milton Bekker, a native of Suriname who developed his craft in his adopted homeland of Holland and eventually crossed paths with Johnson on the streets of Barcelona.

Recorded in Santa Monica, California, Old Soul captures the vintage American soul music that awakened Bekker's musical consciousness when he was still a young boy in Holland in the 1970s and early ‘80s. Producers Reggie McBride and Mark Johnson, assisted by a crew of veteran soul musicians directly connected to that seminal period, take Bekker on a trip back in time to revisit the powerful sounds originally crafted by iconic figures like Otis Redding, Al Green, Sam and Dave, and many others.

Bekker's worldly wisdom is evident on every track in Old Soul. The album opens with the uptempo "Any Other Way," a testament to the inner strength that it takes to keep your head up after a breakup. Bekker and his crew shift gears into a slower, funkier groove for Allen Toussaint's "Yes We Can Can," a heartfelt call for unity and harmony in a desperate and broken world.

Further in, Bekker digs a swampy groove that underscores Bill Withers' suspicious and confrontational "Who Is He (And What Is He To You)," then does a quick detour into the rousing devotional "Try a Little Tenderness," the anthem that became Otis Redding's signature song shortly after he recorded it in 1966. "Of course, Otis owns that song," says Bekker. "His version is fantastic, something no one can touch. But we did it in one take in the studio, and it felt so good. When I listened to the playback, it just gave me goosebumps."

A longtime fan of Al Green, Bekker considers "Tomorrow's Dream" one of his favorite tracks on the album. While the arrangement here is a bit leaner than the big sound that defines many of the other tracks, the emotional impact is just as powerful here as anywhere else in the set.

In the home stretch, "Shine On Me," Bekker's one original contribution to the album, fits seamlessly with the balance of the material, thanks in large part to the sincerity of his lyrics combined with an arrangement that takes all the right cues from the old school. "Hold On, I'm Coming" written by Isaac Hayes and made famous by Sam and Dave, is the rousing closer.

"I'm amazed by the road my life has taken and how it has changed along the way," he says. "It's really difficult for a European artist to have an impact outside of his own continent or even his own country, but by the grace of God, I've been given a chance. It's up to me now to make the best of that chance. I just want to make music for anybody who wants to listen to it." Bekker has experienced enough of the world that he's not afraid to take charge of his corner of it. Old Soul is a reverent tribute to the past, by an artist who keeps one eye fixed on the future.