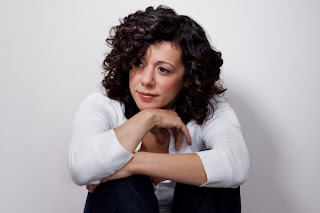 After a three-year hiatus from recording, consummate artist and Jazz Singer Luciana Souza returns to Sunnyside Records with two new albums produced by Grammy-winner Larry Klein and slated for August 28th, 2012 release – Duos III, and The Book of Chet. The simultaneous release of the two CD’s will be accompanied by tour dates throughout the Fall and Spring including Joe’s Pub in New York City on September 12th and an evening at Los Angeles’ Broad Theatre on September 1st.

“People think I’m crazy when I tell them I’ve been working on two new CD’s at the same time,” laughs Souza, “and even crazier when I let them know I’m releasing them at the same time as well. But in a strange way there are some very distinct parallels between the two projects and besides that it’s just something I wanted to do, to buck the trend and create the music that I want to make.”

Duos III celebrates the ten-year anniversary of the release of Luciana’s Grammy- nominated and much celebrated CD, Brazilian Duos. Her Duos II record also went on to receive a Grammy nomination for Best Jazz Vocal Record. The last volume of this trilogy brings back her long time collaborators - guitar phenomenon Romero Lubambo, and master guitarist Marco Pereira - and introduces Toninho Horta, one of Brazil’s most unique guitarists and composers. The repertoire is again as varied and beautiful as the Brazilian landscape – including works by Antonio Carlos Jobim, Cartola, Gilberto Gil and Toninho Horta.

“In the last 10 years I have had a lot of opportunity to perform in this format (duo),” added Souza, “traveling the world, and each time understanding more about the dialogue between voice and guitar, and the inevitable clarity and intimacy. Both projects come from the desire to peel away the layers of artifice and get to the core of each story, each sound.”

The Book of Chet is Luciana’s inspired interpretation of the music of trumpet player and singer Chet Baker. An iconoclastic musical figure, Chet had a unique and lyrical approach to singing – informed by his superb musicianship, his singing was heartfelt, yet detached. “It is a well known fact that musicians like João Gilberto were listening a lot to Chet Baker and the sounds coming out of the West Coast of the US. That kind of quiet, introspective singing was started by Chet while Miles’ playing, tone and sensibility ended up influencing many musicians in Brazil.”

On this recording (Luciana’s first exclusive recording of American standards), Luciana reveals why she has been considered one of the most important Jazz singers of her generation – able to unveil the drama of the lyric and allow for intimacy with the listener, all the while creating an inventive and deeply personal recording. Her collaborators on this collection are West Coast greats Larry Koonse on guitar, David Piltch on bass, and Jay Bellerose on drums. Included on the CD are such unforgettable Baker-associated tracks as “I Fall In Love Too Easily”, “The Thrill Is Gone”, “He Was Too Good To Me” and “Forgetful”.

The Grammy winning Souza is one of Jazz’s leading singers and interpreters. Born in São Paulo, Brazil, in the late sixties, she grew up in a family of Bossa Nova innovators - her father, a singer and songwriter, her mother, a poet and lyricist. Luciana’s work as a performer transcends traditional boundaries around musical styles, offering solid roots in jazz, sophisticated lineage in world music, and an enlightened approach to classical repertoire and new music.

As a leader, Luciana Souza has been releasing acclaimed recordings since 2002 - including her four Grammy-nominated records Brazilian Duos, North and South, Duos II, and Tide. Ms. Souza has performed and recorded with greats including Herbie Hancock (on his Grammy winning record, River – The Joni Letters), Paul Simon, James Taylor, Bobby McFerrin, Maria Schneider, Danilo Perez and many others. Her longstanding duo work with Brazilian guitarist Romero Lubambo has earned her accolades across the globe, and her complete discography contains more than 50 records as a side singer.

Luciana Souza has been a prominent soloist in two important works by composer Osvaldo Golijov – La Pasion According to St. Mark and Oceana. She has performed with the Bach Akademie Stuttgart, the Boston Symphony Orchestra, and the Brooklyn Philharmonic. Other orchestral appearances include performances with the New York Philharmonic, the Atlanta Symphony, the Los Angeles Philharmonic, and the Los Angeles Chamber Orchestra. Her work in chamber music includes a fruitful collaboration with the Los Angeles Guitar Quartet.

Ms. Souza began her recording career at age three with a radio commercial, and recorded more than 200 jingles and soundtracks, becoming a first-call studio veteran at age sixteen. She spent four years on faculty at Berklee College of Music in Boston, whereshe received a Bachelor's in Jazz Composition. Ms. Souza earned a Master's degree in Jazz Studies from New England Conservatory of Music and taught for four years at the prestigious Manhattan School of Music, in New York City. From 2005 to 2010, Luciana was the Jazz Artist in Residence with the prestigious San Francisco Performances.
Posted by Jazz Chill at 1:55 PM