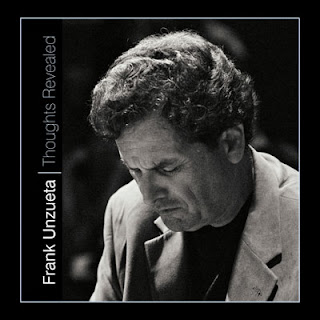 Sunstone Records has released the debut full-length record from Southern California-based jazz pianist and composer Frank Unzueta. The nine-song album is entitled Thoughts Revelead. Influenced by Bill Evans, Chick Corea, and Oscar Peterson and reflective of his classical studies, Thoughts Revealed is the culmination of many years of composing and playing. From the beautiful ballad "The Me You Created" to the Scott Joplin-influenced "Happy Toes Rag" and the Latin rhythms of "Elisa's Dream," each track is infused with personal story and diverse style inspirations that cross both era and geographic boundaries.

Frank has advanced classical piano training, but is entirely self-taught when it comes to jazz. “I was a guitarist first, but jazz always interested me. It’s very natural to transfer those sounds to piano.” Frank has been a staple in the Southern California live music scene for several decades, including as founder of the world jazz outfit One World, which performed with Los Lobos, The Yellowjackets and Los Angeles Philharmonic. He lives in the San Pedro area, is active in the community he loves, and is working with the Music on Wheels program to bring music to people and institutions that do not have easy access to it.

The trio is rounded out by Larry Steen on bass, who has worked with artists including Ella Fitzgerald and Mel Torme, and drummer Gordon Peeke, whose credits include Stanley Clarke, Michael Jackson, and Bonnie Raitt. Also appearing on the record is saxophonist Eric Marienthal, who has worked with Chick Corea and David Benoit.

Thoughts Revealed was produced by Frank and Rafa Sardina, who has worked with Michael Jackson, Macy Gray, Michael Jackson, Shakira, Dr. Dre, Mariah Carey, and Angie Stone. He has won 11 Grammys and received 25 American and Latin Grammy nominations for his work with Stevie Wonder, Luis Miguel, and Alejandro Sanz.

THOUGHTS REVEALED TRACK LIST
1. Angel Girl
2. Happy Toes Rag
3. The Me You Created
4. Elisa’s Dream
5. It Means Nothing…It Means Everything
6. Anything For You (For Cathy)
7. Madrid
8. The Apostle
9. Love Me When Winter Comes

MP3 “The Me You Created”
http://soundcloud.com/brosseaupr/the-me-you-created-from/s-Lvxtx

VIDEO
http://www.youtube.com/watch?v=11135WwWP8w&feature=youtube_gdata_pl
Posted by Jazz Chill at 8:09 AM