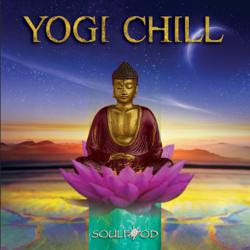 Produced by DJ Free and engineered by Michael Chavez, Yogi Chill was mixed and mastered by John Kurzweg at Soulfood Studios in Santa Fe, NM. Soulfood Music founder DJ Free came up with the concept for rhythmic, chill based music for yoga while guest teaching at noted center for humanistic alternative education the Esalen Institute in Bug Sur, California. There he began collaborating with musicians and yoga professionals who saw a need for rhythmic music that would work for fitness styles of yoga. DJ Free continued the concept and while spinning at music festivals such as Burning Man, he was able to further collaborate with DJ’s, artists, musicians, dance instructors and Yoga professionals from around the world. Yogi Chill is the intersection of the place where Yoga meets chill.

“This release is a hypnotic musical journey of what I call Transglobal Electronica – music that bridges chill, down tempo feel with organic percussion, flutes and chants,” says Soulfood Music founder, DJ Free.

Soulfood Music’s founder DJ Free is an award winning producer/composer who scored soundtracks for IMAX® "Extreme", PBS/National Geographic special "Condition Black" and the ESPN series "Making of Extreme". His DJ roots, along with the world’s indigenous cultures, influence his music. He has charted on Billboard and several international DJ and Dance charts. He works with award winning artists from a variety of cultural and musical backgrounds to create a fresh mix of music for yoga, spas and just chilling. Soulfood’s Yoga Music has been licensed for fitness – yoga compilations and on numerous yoga videos worldwide including the UK, Germany and the US companies such as Gaiam and Power Music and the 2006 release Yoga Groove was a top 10 on iTunes in its genre.

“This is music that goes beyond the yoga studio – while it’s great for flow yoga, I love to listen to it while relaxing with friends or hosting a dinner party,” says Heidi Schaeffer, COO Soulfood Music.
DJ Free will be touring in the “Buddha Lounge”, a mobile DJ “club” in a stylized airstream trailer to several Music/Art/Yoga Festivals in support of the release of Yogi Chill including Sonic Bloom, June 21st – 24th, Vail, CO and Burning Man, August 27th – September 3rd, Black Rock Desert, NV.
Posted by Jazz Chill at 10:46 AM