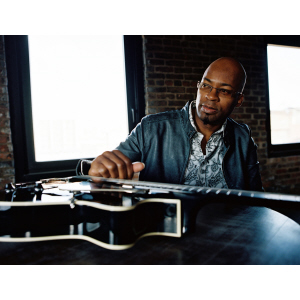 On August 28, the acclaimed West African jazz guitarist/vocalist Lionel Loueke will release Heritage, his dynamic third Blue Note album, which was co-produced by label mate Robert Glasper. Heritage finds Loueke—who was hailed by The New York Times as “a gentle virtuoso”—exploring a more electric sound with a new trio featuring Derrick Hodge on electric bass and Mark Guiliana on drums. The album presents seven new compositions by Loueke, two by Glasper, and one co-written by the two. Glasper also contributes piano and keyboards to six tracks, while singer Gretchen Parlato provides background vocals on two tracks.

A veteran of bands led by Terence Blanchard and Herbie Hancock, Loueke is bringing jazz into vibrant contact with the sounds of West Africa, in particular his native Benin. The title Heritage is a direct reference to his personal odyssey. "I have two heritages," Loueke says. "One is from my ancestors from Africa, and that goes through my music, my body, my soul, every aspect of what I do. But also I have the heritage from the Occident, from the West, from Europe and the U.S. I speak English, I speak French, and I have that heritage too. I called this album Heritage because I've been blessed by all different parts of the world, and most of the songs reflect that."

"Robert is a true genius," says Loueke of his producer and friend, "and I knew that he'd be the right person. I like a musician who surprises me all the time. We're good friends and we're both open, and that's when the magic happens." Loueke has performed as a special guest with the Robert Glasper Trio, and was in fact an original member of the Robert Glasper Experiment when it first formed.