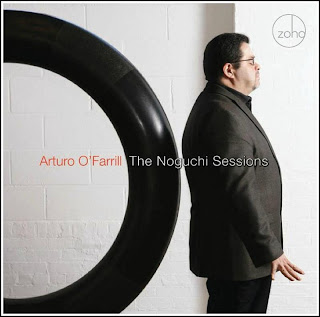 For some, each discipline in the arts is a self-contained universe, with its own materials and tools and ruled by its own laws. But great art transcends -- sometimes in unexpected ways. Consider the reaction of GRAMMY® Award winning pianist, composer and educator Arturo O'Farrill to the work of Japanese-American artist Isamu Noguchi (1904-1988).

I performed at a gala at The Noguchi Museum, and I noticed how in many of Noguchi's stone sculptures there's a section, maybe a side or an angle, that is unfinished," recalls O'Farrill. "He had such a mastery over these huge stone and metal structures, and yet he left parts of his raw material untouched. It's almost as if he were inviting the viewer to complete the piece, to enter the conversation."

Paradoxically, for O'Farrill these solid pieces "also capture the transient nature of life."
"When you are in a room surrounded by objects that weigh several tons, you definitely feel your fragility, the transience of being a bag of skin and bones. We are not permanent. And Noguchi captures that fleetingness of our lives in his work."
If all this struck a chord with O'Farrill it was in part because, as he sees it, "there is an unfinished quality to jazz. It's not supposed to be finished. The best jazz has a certain roughness. It's not supposed to be all perfectly polished."

It's not by chance, then, that O'Farrill chose The Noguchi Museum (in Long Island City, NY) as a setting for perhaps his most personal and challenging project to date: a recording of solo piano. "I have waited to record solo piano. It is the scariest thing a pianist can do. But that's not why," O'Farrill writes in his notes to The Noguchi Sessions. "I think it's because I feel a bit like an outsider."

In Noguchi, an American of mixed descent, O'Farrill, born in Mexico to a Cuban father and a Mexican mother but raised in New York, saw himself in an unexpected mirror. And in Noguchi's multifaceted approach to his work -- painting, drawing, sculpting and designing furniture, lighting, and public spaces -- he found a kindred spirit. O'Farrill has not only performed as a soloist, and led and composed for small and large ensembles (including the Afro Latin Jazz Orchestra), but also created his own organization. The Afro Latin Jazz Alliance is a non-profit organization committed to advancing the performance and educational aspects of the music -- just as Noguchi created his own museum.

"While I would not have the hubris to imagine myself as profound as the master," writes O'Farrill in his notes, "I think I understand why he felt this way and created his own path. It's about the art."
This recording, he continues, is "a chance to deal with all of these ideas: the idea of being an outsider, the idea of free improvisation, the recasting of tradition, and, most of all, the desire to honestly transmit the fleeting, the illusory, that which is like a vapor that is here one minute and then vanishes away."

For The Noguchi Sessions, O'Farrill simply set up his piano in one of the galleries of the Museum after closing time and played, recording the whole album in one sitting. The recording took place in what is known as Area 3 here.

"I had been working on some of these pieces for the past two years at the Puppet's Jazz Bar, a little club here in Brooklyn where I played every Wednesday. Sometimes I'd have 20 people, sometimes there would be two people," recalls O'Farrill. "It was a very interesting experience. By the time of the recording I had things all worked out. But when I sat down to play, I kind of abandoned the game plan I had and entered a very exposed and vulnerable, truly improvisational space."

The results are not just technically impressive but deeply affecting. The sum of the 12 pieces in The Noguchi Sessions paints a very personal musical self-portrait of O'Farrill.

The program touches on family ("Alisonia," inspired by the relationship with his wife Alison, and "In Whom," dedicated to his son Zack) and country (Stephen Foster's "O' Susanna," and "The Delusion of the Greedy," his commentary on the machinations of Wall Street). It nods to his familial roots in Cuba and Ireland ("Siboney" and "Oh Danny Boy") and his American life (Mingus' "Jelly Roll"); and it also captures O'Farrill in a couple of fully improvised pieces ("Once I Had a Secret Meditation," which grows out of "Once I Had a Secret Love," and "The Sun at Midnight," inspired by a Noguchi sculpture of the same name.

There are several instances in this recording in which certain themes or ideas are revisited in different pieces creating intriguing pairings: "O' Susanna," and "Jelly Roll," suggest two views of America; one is "a song .. with grotesque stereotypes," the other, a celebration of an open, inclusive country. "The Delusion of the Greedy," and "Oh Danny Boy," look at a place of deceit but also, on that September 11, 2001, a place of heroism and ultimate generosity.

"Alisonia," and "Mi Vida," the latter written to commemorate the fiftieth wedding anniversary of his aunt and uncle, offer two views on couples and relationships. And in "In Whom," and Randy Weston's "Little Niles," two fathers address their sons.

The strategy suggests O'Farrill circling around a certain subject, not unlike one might circle around a sculpture, illuminating it from different sides. Perhaps significantly, this was unplanned. "It just happened," he says. "But serendipity is less of an accident than we think."

And if O'Farrill's playing in The Noguchi Sessions has a certain indefinable quality, intense yet lyrical, consider it part of the pianist's response to Noguchi's work. "There is a thickness, a kind of dense quality to his work," says O'Farrill. "But I find that's one of the magical things about Noguchi's work: some of his pieces weigh tons, they would crush you if they fell on you -- yet they seem to soar. So when I sat down to playing, I tried to capture that density, that weight -- but also the lightness."