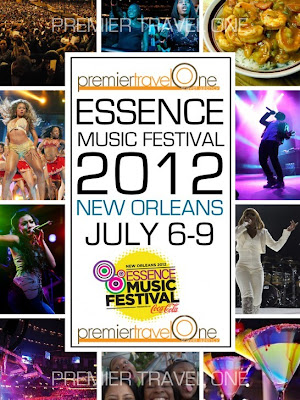 Every year over 400,000 people from around the world descend upon New Orleans for the only music festival that offers not only scorching music performances and a party filled atmosphere, but also a full Empowerment Experience and four days of family friendly fun: the ESSENCE Music Festival. This year, in its 18th year of existence and bigger, better and with a more complete programming line up than ever, the 2012 ESSENCE Musical Festival will celebrate its 18th anniversary this July 5th, 6th, 7th and 8th in historic New Orleans, LA, with the most lauded names in entertainment and the nation's most influential speakers, artists, authors, educators and leaders.

This year the ESSENCE Music Festival will conclude their world class musical programming on Sunday, July 8th, with a special, once in a lifetime ensemble comprised of Chaka Khan and the R&B Divas. Immediately following the legendary Aretha Franklin's headlining performance, Chaka will return for a sixty-minute encore performance with the R&B Divas, comprised of Faith Evans, Nicci Gilbert, Monifah Carter, Syleenah Johnson and Keke Wyatt. Together these powerful voices will pay tribute to the R&B artists who passed away over this past year.

Kicking off on the inaugural day of Thursday, July 5th, the Festival, long known as a family friendly Festival, will celebrate a full day youth empowerment experience at the Ernest N. Morial Convention Center, culminating with the first ever youth empowerment concert on the New & Next stage that night at the Louisiana Superdome. Hosted by Wild Wayne and actress Rocsi Diaz, the New & Next stage will feature a roster of rising young stars including the newly added Roshon Fegan in addition to Kaitlyn Nichol, Coco Jones, recording artist and hip-hop royalty Diggy Simmons, R&B pop group The OMG Girlz and New Orleans' marching band The Roots of Music. These bright young stars are the first-ever generation of performers to represent the New & Next Stage and will be sure to dazzle on July 5th. Sponsored by Verizon, Wal-Mart and community partner Capital One, tickets for the New and Next Stage are available at essencemusicfestival.com.

Forever anchored in Empowerment and not just entertainment, the ESSENCE Empowerment Experience brings together the leaders, innovators, activists, experts, artists, performers and thinkers who are defining the social and political discussions that matter most to attendees all under one roof at the Ernest N. Morial Convention Center. The "Power of Our Voice" is the theme of this year's 18th annual Essence Music Festival and through this forum Essence will celebrate the power of Family, Community and Spirit within a unique gathering that is free and open to the public. Inspirational speaker and New Thought spiritual teacher, Iyanla Vanzant, has been newly added to the line up which already includes Steve Harvey, Vanessa Williams, Reverend Al Sharpton, Soledad O'Brien, Alice Randall and Tamar Braxton, amongst many others.

Sponsored by Coca-Cola, My Black Is Beautiful, McDonald's, Wal-Mart, Verizon, Capital One and the Steve & Marjorie Harvey Foundation, the Youth Empowerment Experience will invite youth groups from the New Orleans area to participate in this year's two programs: the Saving our Sons mentoring initiative spearheaded by Mayor of New Orleans Mitch Landrieu and the Girl Up NOLA initiative led by First Lady Cheryl Landrieu. Saving Our Sons is a call to action for the community to invest in the lives of young men to prevent violence and stop the murder epidemic and high crime rate in New Orleans as well as every city across the nation. The program recruits and trains mentors to help over 100 young males and their needs through partnerships with community organizations.

Now in its 18th year, the ultimate destination for entertainment and inspiration hosted over 422,000 attendees last year. What began in 1995 as a one-time event to celebrate the 25th Anniversary of Essence magazine has now grown into one of the country's "Top 10 Leading Brand Events" by Advertising Age. The Essence Music Festival is the nation's largest annual gathering of African-American music and culture. Throughout its history, the Festival has featured an array of performers including Aretha Franklin, Alicia Keys, Al Green, Beyonce, Chaka Khan, Destiny's Child, Earth, Wind & Fire, Gladys Knight, LL Cool J, Jamie Foxx, John Legend, The Isley Brothers, Lionel Richie, Luther Vandross, Maxwell, The O'Jays, Prince, Rihanna, Stevie Wonder, Toni Braxton, Patti LaBelle and Yolanda Adams, among others.
Posted by Jazz Chill at 10:55 AM