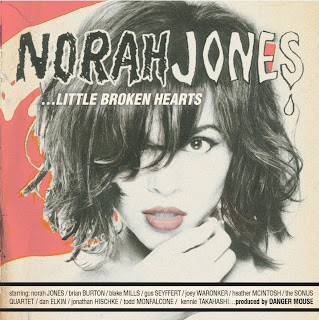 Norah Jones’ new album Little Broken Hearts-which was produced and co-written by Danger Mouse-has been receiving unanimous praise from critics across the board. SPIN magazine called it “the second essential record of Norah Jones’ career,” while a cover story in MAGNET magazine declared that “she just might have made the album of the year.” Jones has been the subject of profiles in the Los Angeles Times, New York Times, Wall Street Journal, USA Today, Associated Press, and on NPR Morning Edition. She has also made a series of TV appearances including performances on CBS Late Show With David Letterman and ABC Good Morning America.

Norah will be kicking off her 2012 North American tour on June 20 in Indianapolis. The tour will hit a mixture of festivals, amphitheatres and theatres including the historic Ryman Auditorium in Nashville (June 24), a hometown show at Central Park SummerStage in New York City (July 3), a return to the Hollywood Bowl in Los Angeles (August 10), and a run of October dates covering the Midwest, Texas, and New Orleans. Visit www.norahjones.com for a full list of international tour dates and ticketing details.

Blue Note has also marked the release of Jones’ new album by reissuing her entire catalog (Come Away With Me, Feels Like Home, Not Too Late, The Fall, and Little Broken Hearts) in an array of higher fidelity editions. All five of her albums have been Mastered for iTunes specifically with the iTunes and iOS platform in mind, ensuring increased audio fidelity. Blue Note and EMI will mark their new relationship with the high-definition digital specialist

HDTracks by issuing all five titles in multiple digital formats that deliver CD quality resolution or better. Audiophile specialist Analogue Productions will release all five titles in limited edition 200 gram vinyl and SACD editions and will bundle the entire catalog plus a bonus album of rare and unreleased covers in LP and SACD box sets.