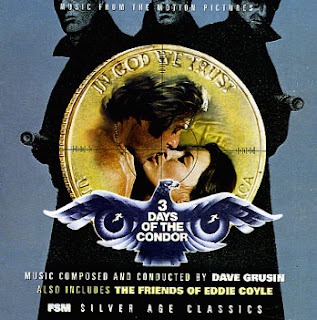 A masterpiece of moody keyboards – two killer 70s scores from the great Dave Grusin! First up is The Friends of Eddie Coyle – wonderful music for a superb late Robert Mitchum film – never available on record, at least that we know of – and filled with the kind of groovy, funky, keyboard-heavy lines that make some of Grusin's early 70s scoring so great! The tunes are wonderful – often a bit short, but very enigmatic – and the package features stunning sound on tracks that include "Mr Connection", "Clean Cut", "Baylis Robbery", "The Stakeout", "Shopping Center", "Partridge Robbery/Take A Walk", "Jackie Meets Pete & Andrea", and "Eddie Is Hit". Three Days Of The Condor is an incredible soundtrack – one of the all-time greats of the 70s!

Dave Grusin really outdid himself with this one – and created a sublime mix of sound, space, and spare funky beats that holds up wonderfully all the way through! The main theme steps around in a haunting mix of electric piano, basslines, and muted trumpets over strings – and lots of other tunes on the set follow the same format – taking the best of funky Morricone and Francis Lai, and giving it an even hipper American twist! Plus, most of Grusin's soundtrack work of this nature was never properly issued (like his great tunes for Barretta!) – and this rare album is one of the few that ever made it, however briefly, to the record racks! Titles include "Condor", "Yellow Panic", "Out To Lunch", "Flight Of The Condor", and "Flashback To Terror". Loads of great keyboards! CD also features 8 more bonus tracks added to the original record – more great Grusin nuggets from the Condor soundtrack – packaged here with great notes, on a CD that's over 70 minutes in length. ~ Dusty Groove
Posted by Jazz Chill at 11:40 AM