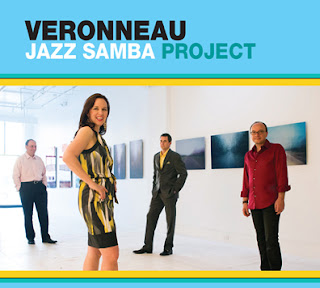 Véronneau is an acoustic, song-based group playing Latin Jazz, Gypsy Swing and much more. At home in an intimate jazz club, world music or folk festival, Véronneau are audience favorites performing in English, French and Spanish. Lynn Véronneau lights up the stage, engaging the audience with her vocal interpretations. The acoustic guitars of Ken Avis and David Rosenblatt and percussion of Pete Walby provide the rhythm, harmony and energy to propel the music from Brazilian samba, to French chanson to standards of The American Songbook.

Véronneau's first album release Joie de Vivre (Joy of Living) quickly climbed into the top of Jazz Week's World Music chart and reached Top 10 status in a number of North American stations. It enjoyed airplay in Canada, England and Scotland where the band toured in 2011 playing festivals and club dates supported with live radio performances and interviews on BBC Radio and Radio Canada.

Canadian jazz critic and audiophile Jordan Richardson commented on the debut recording, "The album is a cultural compendium of musical styles surrounding an astonishing voice - an exciting offering for those thirsting for something unique and beautiful."

Since forming in 2010 Véronneau's multi-national musicians, currently based in Northern Virginia, have delighted audiences at clubs concerts and festivals in the US, Canada and Europe.

Veronneau consists of Quebecoise vocalist Lynn Véronneau who is well-known for her gentle, compelling, warm voice and her love of powerful melodies. Her solo album, Something Cool -- a collection of jazz standards, pop, and blues -- attracted kudos from critics, radio stations and public alike. As a classically trained singer, Lynn brings an effortless technique to her heartfelt interpretations in the jazz style. Lynn has performed throughout Canada, Europe and the US and recorded in her own right and as a session vocalist for others.

Lynn met and performed with her musical soul mate, guitar player, singer/songwriter Ken Avis in Switzerland, before moving to the US. Now they add guitarist David Rosenblatt and drummer Pete Walby to the mix.

Rosenblatt developed his love of Brazilian acoustic guitar as a child living in Rio. He subsequently crafted his sound in Brazil and San Francisco with study and live performance. David's beautiful solo composition, "Opening of Summer," is featured on the new CD.

Ken Avis has devoted himself to exploring blues, jazz and roots music. Ken was the vocalist for five years with the renowned (WC Handy Award winning) Otis Grand blues band and has performed throughout the UK, Europe and the US with various bands.

Washington DC drummer Pete Walby, is steeped in bossa nova, jazz and sartorial elegance and completes the band. Originally from Monterey, California, Pete lived in the middle east before returning to the US and to the DC area.

~ www.veronneaumusic.com
Posted by Jazz Chill at 10:34 AM