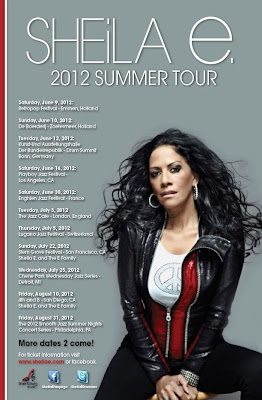 Sheila Escovedo was born into a musical family. The eldest child of Pete and Juanita Escovedo (she has two brothers, Juan and Peter Michael, and one sister, Zina), she started playing with the family instruments at the age of 3.

Sheila was obviously influenced by her father Latin jazz legend and timbalero Pete Escovedo (then band leader of the influential band Azteca) while watching him rehearse. At 5 years old, she made her concert "debut" at the former Sands Ballroom in Oakland, as she was invited on stage by her father to play a solo in front of an audience of 3,000. At that moment, Sheila knew exactly what she wanted to do: she was going to be a percussionist.

In 1983, Sheila caught the attention of Prince and changed her name to "Sheila E.," and Prince helped her record her first solo album, The Glamorous Life. The first single from the album, "The Glamorous Life," written, performed, and directed by Sheila E., was released in the spring of 1984 and earned popular and critical acclaim. This single went on to receive multiple Grammy and American Music Award nominations, and won MTV's Best Video Award. "The Glamorous Life" yielded a hit single in the title track, and another hit for its follow-up single, "The Belle of St. Mark."

In 2004 Sheila joined Prince on the "Musicology" tour, which was seen by 1.5 million people. She also performed "The Glamorous Life" at the 7th Annual VH1 Divas, a benefit concert for the VH1 Save the Music Foundation that was televised worldwide, and appeared on the TBN network show "Praise The Lord" that received the highest ratings of the season. In 2005 Sheila was a Featured Artist and Musical Director for her first gospel tour "Sisters In The Spirit" featuring Yolanda Adams, Martha Munizzi, Kelly Price, Juanita Bynum and RiZen. In the summer of 2006 Sheila returned for the third time and toured in concert with the legendary Ringo Starr. In 2006 Sheila founded her all girl group C.O.E.D. (Chronicles Of Every Diva) featuring Sheila E., Rhonda Smith, Kat Dyson, and Cassandra O'Neal, who went on their highly acclaimed first European tour in March 2007 with special guest Dutch sax player Candy Dulfer. In 2007, Sheila was chosen as one of the celebrity judges for American Idol Spin-Off "The Next Great American Band."

Most recently, Sheila E. participated in the third season of CMT's hit show, "Gone Country." With the goal of creating a hit country music single, each "Gone Country" cast member is uprooted to Nashville for an intense two-week challenge. Justin Guarini, Taylor Dayne, George Clinton, Tara Conner, Richard Grieco, and Micky Dolenz competed on the third season along with Sheila E. Each celebrity was paired with two of Nashville's finest songwriters with whom they wrote a country single. In addition to meeting with songwriters, the cast competed in challenges that tested them musically and physically to adapt to a life in country music, both on and off the stage. Sheila E. was the Grand Prize Winner of the third season and has gone on to release her first country single & video for her song, "Glorious Train."

In 2009, Sheila E. won the CMT reality show, Gone Country. This gave her an opportunity to make country music aided by the country producer, writer, and singer John Rich. Sheila E.'s first song in the country market was "Glorious Train". A video for the song debuted on CMT on March 7, 2009, following the airing of the episode of Gone Country in which Sheila E. was announced the winner.

On October 13, 2009 Sheila E was band leader for the PBS special, "Performance at the White House: Fiesta Latina" hosted by President Barack Obama and First Lady Michelle Obama. In 2010 Sheila was nominated for an Emmy for Outstanding Music Direction for this special.

2012 Sheila collaborates with Hans Zimmer on music for the upcoming film Madagascar and in the music production for the 2012 Academy Awards show.
Posted by Jazz Chill at 5:01 PM