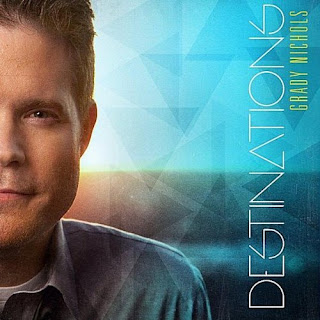 Saxophonist Grady Nichols’ new CD, Destinations, is a musical vacation. You can visit the beach (“Beachside”), explore the streets of London (“London Baby!”), go a little country (“Tulsa”), hit the west coast (“You With Me”), spend time daydreaming (“Walk Thru My Dreams”) and come back home again (“Coming Home”). After listening to the CD, you realize you have embarked on a musical journey touring various genres without any layovers.

Grady steps into new territory by peppering this project with a driving banjo, pedal steel guitar, steel drums, and string section which are woven seamlessly into a cohesive contemporary jazz / pop setting. It’s always more fun traveling with your friends and joining Grady on his journey are Grammy winner Bill Champlin who lends his voice and Hammond B-3 chops on “You Know Me.” Grammy nominee Jeff Lorber continues his collaboration with Grady on “You With Me” with LA session king Michael Thompson on guitar.

“When I first met with producer Chris Rodriguez, I explained my passion for the saxophone and how I felt it was a ‘voice’ that could ‘sing’ a lot of styles. I also felt that the sax was a key part in some of the most memorable songs in pop music over the last 30 years. I wanted to tap into all of that with this record. Chris understood how to bring it all together and give me a project that was an absolute blast to make. He and I both listen to a lot of different kinds of music and Chris’s experience performing with Keith Urban, Kenny Loggins, Amy Grant, and Faith Hill brought a bunch of ingredients together and yet stayed true to my voice.”

Grady’s many influences are evident on Destinations. A native of Arkansas, Grady’s main exposure to any type of jazz as a teenager was through the Weather Channel. (He even wrote the network to get a copy of their playlist and began learning about the artists played during the local forecast.) Some of his early influences were David Sanborn, David Foster, Chicago and a myriad of classical film scores.

Grady realizes many fans are not “locked” into one genre and with the digital world, listeners can easily explore an array of music. “Like my audience, I enjoy different styles of music. I try to push the envelope a bit in concert to see how the fans will react. I also attend many concerts and realize a John Mayer or Keith Urban fan may also like my music. So I was inspired to write in the style of a singer-songwriter with the saxophone as the lead voice (“You Know Me”). I re-interpreted Keith Urban’s “Only You Could Love Me This Way” as an instrumental. And my cover of Journey’s “Faithfully” has been a hit in concert for some time now.”

On Grady’s last three projects, he has worked with producers that are also writers/artists/performers. One of the key advantages is the collaborations result in songs that can go from studio to stage. “Chris is a consummate musician and performer. He knows how to get on stage night after night in front of rock, pop, Christian and country audiences and deliver great performances. The songs we developed will work live in front of an audience as well as on the CD.”

Destinations is Grady’s sixth CD. His last project Take Me With You, was produced by artist/writer Zac Maloy (Daughtry, Blake Shelton, Carrie Underwood), featured a guest appearance from Leigh Nash of Sixpence None The Richer and a house remix tune from Andy Caldwell. Fusion/Smooth Jazz Jeff Lorber produced Sophistication with Paul Brown mixing and Chris Botti making a guest appearance. The CD had two national charting singles. In The Fullness of Time was recorded live with Chicago’s Bill Champlin contributing his vocals on a couple of tunes. Grady’s earlier releases were Mysterious Intentions and Between You And Me.