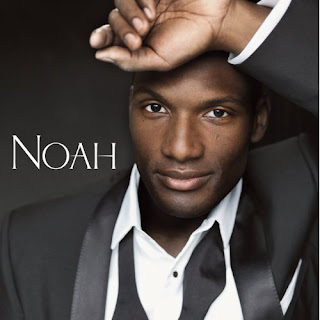 It is hard to believe that only a few years ago Noah was a receptionist at New York's Carnegie Hall, working to pay for his singing lessons. He has of course, since then, performed on that stage and is now building a fine reputation as a fast-rising operatic tenor, equally accomplished in interpreting such core roles as Don Jose in Carmen or Rodolfo in La Boheme or pioneering new roles in contemporary opera. But Noah also knows that there was a time when being an operatic tenor didn't just mean performing at the opera house, but could encompass all kinds of popular and traditional songs too. From Enrico Caruso to Luciano Pavarotti, history's classic tenors all had the popular touch.

The upcoming album from Noah Stewart, Noah, includes fine renditions of the operatic arias Recondita Armonia, from Puccini's Tosca, and Pourquoi me reveiller, from Massenet's Werther, as well as the enduringly popular Bach/Gounod version of Ave Maria. But it casts its net much wider too. With inspirational input from producers and arrangers Steven Baker and Christian Seitz, the album also presents Noah's rich, resonant voice in the spiritual classic Deep River, and the traditional tunes Silent Night and Nearer My God To Thee.

Noah Stewart’s musical development started in Harlem where he studied classical music at The Harlem School of the Arts. At age 12, his choir teacher encouraged him to pursue a music career; he began doing voice-overs for Sesame Street and television school specials, and won first place in the New England Music Competition in Boston. Stewart attended Fiorello LaGuardia High School, where he performed his first opera (La Costanza in amor vince l’inganno). He also sang back-up vocals for pop artists such as Hootie and the Blowfish, Mariah Carey, and Coolio. During this time, Stewart developed a passion for opera, languages, art song, oratorio, and concert repertoire, and committed himself to pursuing an operatic career. He was recommended by his mentor, the great soprano Leontyne Price, to attend The Juilliard School, where he was awarded a full scholarship.

By the end of his senior year at Juilliard, Stewart was already receiving attention from the professional classical community and was Featured in the book Spirit of Harlem by Craig Marberry and Michael Cunningham . He was unable to attend his own graduation for the opportunity to perform the title role in Acis and Galatea on tour with The Bach Society of Columbia in Germany. Upon his return to the United States, Stewart was accepted into the San Francisco Opera’s prestigious Merola Program, where he was given his first taste of modern opera as The Wizard in Conrad Susa’s Transformations. He reprised the role at The Wexford Music Festival that same year. He was subsequently invited to become a San Francisco Opera Adler Fellow, and numerous important debuts soon followed including T. Morris Chester in the world premiere of Philip Glass’ Appomattox, Malcolm and Macduff in Macbeth, stepping into the main-stage role with only 15 minutes notice. After graduating from the Adler Fellowship, Stewart made his next modern opera debut as The Prince in the first fully staged production of John Adams’ A Flowering Tree with Chicago Opera Theater.

In 2008, Opera News gave Stewart rave reviews for his debuts in Philip Glass and John Adams’ productions. Stewart has also been awarded numerous prizes in The Palm Beach Opera, Leontyne Price, George London, Licia Albanese, Opera Index Competitions, and just recently first place in The Mario Lanza Competition for Tenors. He has been noted for the uniquely baritonal timbre of his ringing and sweet tenor instrument, as well as his innate musicality and commanding acting ability.

Recent Engagements include Rodolfo in Puccini’s La Boheme with Michigan Opera Theater and Wexford Festival Opera, along with Augustus Gloop in the european premiere of The Golden Ticket written by Peter Ash with librettist Donald Sturrock. Stewart also Reprised his role as The Prince in John Adams’ A Flowering Tree in Lisbon with The Gulbankian Symphony, as well as performed Luigi in Puccini’s Il Tabarro at the Castleton Music Festival under the baton of Maestro Lorin Maazel, his role dubut of Cavaradossi in Puccini’s Tosca with Michigan Opera Theater, The Prince in John Adams’ A Flowering Tree with The Gulbankian Symphony in Paris, Rodolfo in La boheme with Opera Carolina, Narraboth in Salome with Arizona Opera, Ismaele in Nabucco with Michigan Opera Theater, Aeneas in Dido and Aeneas with The Yard Arts Festival, Tonio in the World Premiere of Louis Gioia’s I Tre Compagni with Encompass Opera, Mozart’s Requiem at Carnegie Hall under the baton of John Rutter and Don Jose in La Tragédie de Carmen with Chicago Opera Theater.

Since joining The Metropolitan Opera roster in the fall of 2008 to cover Arturo in Lucia di Lammermoor, Stewart’s roles also included Azael in L’Enfant Prodigue with Metro Chamber Orchestra, Manrico in Il Trovatore with Festival Opera and Turiddu in Cavalleria Rusticana with The One World Symphony. Upcoming performances include his role debut of Don Jose in Carmen with Opera Africa, The Prince in John Adams’ A Flowering Tree with Cincinnati Opera and creating the role of Hassan in Judith Weir’s Achterbahn which will mark his forth world premiere by a modern composer at The Bregenzer Festspiel, A role he will further perform in his upcoming Covent Garden debut in 2012.