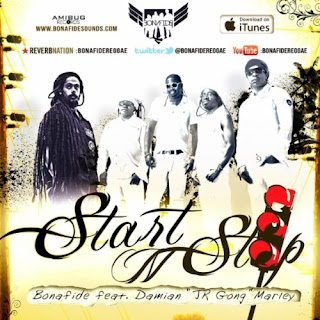 Critically acclaimed reggae band Bonafide as released their highly anticipated title track “Start N’ Stop” to iTunes. This will be the third track off the album and has been highly anticipated world wide. The two driving forces behind this anticipation is the star power of Damian “Jr. Gong” Marley’s three verses on the track and the prior two singles released that have garnered notable success in Jamaica. “Leaving Come the Morning,” ft. Vybz Kartel was the first single to be released and quickly climbed to #1, holding that spot for 4 weeks. Currently, “I Wanna Be The One,” featuring Etana is in the #2 slot and has been on the charts for 16 weeks. The album which is due to be released in late July also will feature Sean Paul, Busy Signal and Luciano. “The band is just blessed to have the Marley bloodlines grace this new album. With Damian on the song “Start N’ Stop,” we really are excited to share this track with the world. It’s been a year in the making and the final product will be up to the fans to embrace.

We are also in the process of finalizing details for the music video shoot. Actor/Producer/Director Eric Martinez and his team will be heading this project. We are still deciding to shoot in Las Vegas or Jamaica. But, I promise you, where ever we do it, our fans will be invited to be a part of the video with us. Big ups and much respect to everyone for all your support! The Bonafide Movement is coming!” – Jr. Roots.

Bonafide consists of four members, Jr. Rootz (vocals/drums), Bass Wayne (bass/vocals), Ricky Dread (keyboards/vocals) and Kerry Ranks (DJ). The band hails from Montego Bay and Clarendon though currently residing in Las Vegas, NV. Bonafide loves its adopted home town and shows this by giving proceeds of each album and or track sold in Nevada to benefit the Help of Southern Nevada Organization.

Bonafide & The Amibug Group have teamed up to take over the world by taking reggae music to places it’s never been before. “In 2012 we’re looking to do bigger things with our music by reaching out and lending assistance to families in need. Just think what would this world be like if we all helped one another reach our potential. That’s what Bonafide stands for. If my life’s purpose is just to make me happy, then it’s a wasted life.” – Junior Roots.
Posted by Jazz Chill at 10:56 AM