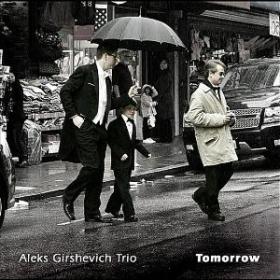 Before you dismiss the Aleks Girshevich Trio simply because the jazz combo is named after its prodigious 11-year-old Russian-American drummer-percussionist, Aleks Girshevich, listen to the scholarly piano etchings vividly composed by his father, Vlad Girshevich. Masters have been bewildered by the cerebral beats and Cuban and Brazilian-influenced rhythms deftly dispensed by Aleks. Produced by the chamber jazz outfit’s award-winning double bassist David Arend, the trio’s passionately performed debut collection, Tomorrow, will be released August 14th by Dapper Music.

Tomorrow is comprised of eight original compositions: seven penned by Vlad Girshevich and a closing experimental improvisational piece, “Dithering,” hatched by the trio. The senior Girshevich’s striking piano melodies occupy center stage throughout the recording and stir a variety of emotions. His melodies are chipper and cheerful, pensive and haunting, and at times touchingly exquisite. The erudite grooves and polyrhythms constructed by Aleks Girshevich and Arend fluctuate in time and tempo mid-tune. Listeners are transported, willing participants on a clever, captivating and challenging journey through wide-ranging peaks and valleys that adeptly invite and embrace without overwhelming. All About Jazz recently wrote, “Tomorrow is an immensely pleasing combination of elegant swing, original craftsmanship, and engaging melodies provided by Vlad.”

Next month, three selections – the title cut, brimful as the day’s first rays of sunlight, “Fragility,” a tender, poignant beauty, and “Broken Promises,” an up-tempo jaunt that provides a glimmer of hope amidst a veil of sadness – will be serviced to jazz radio stations across the U.S. to help pave the way for the album’s arrival.

Arend said, "For me, Tomorrow celebrates the debut of a trio full of promise. Our style could be termed 'chamber jazz' for there is an intimacy and an expressive, coloristic aspect that create an aura similar to classical chamber music. The listener is drawn into a conversational, contemplative atmosphere that swings and sighs. Vlad and I have shared musical and philosophical ideas over 15 years. Now that young Aleks has begun to harness his prodigious gift for drums and percussion, it is evident that this trio's time has arrived. In this sense, Tomorrow is here."

A classically trained pianist and composer, Vlad Girshevich emigrated from Tashkent, Uzbekistan to Aspen in 1996. He was introduced to Arend, who was studying classical music at the Aspen Music Festival at the time. Although Vlad did not speak English, the two men communicated through music on the bandstand and a friendship was formed. After Herbie Hancock heard Girshevich perform, he invited him to be a fellow at the Thelonious Monk Institute at JazzAspen/Snowmass. Arend and Girshevich played in duo and trio settings over several summers in Aspen before the bassist moved to New York City to attend The Juilliard School. Together they recorded We The People in 2000, but distance made collaborations difficult over the next decade. During that period, Arend’s artistic endeavors spanned jazz, modern chamber music, electronica, opera and orchestral work and included diverse collaborations with Ornette Coleman, Bela Fleck, Bobby McFerrin and Carlos Santana as well as playing on New Zealand’s Classical Record of the Year (2000).

He has over 20 years of orchestral experience teaming with the San Francisco Symphony and a bevy of world-renowned composers (John Williams, Tan Dun, George Crumb) that has seasoned his licks with a distinctively classical sensibility. Rooted in the Russian classical realm, Vlad Girshevich often performed in the jazz spectrum with the likes of Wayne Shorter, Arturo Sandoval and legendary drummer Horacio “El Negro” Hernandez, the latter of whom offered encouragement after watching a YouTube clip of a then 9-year-old Aleks drumming in 2010. Later that year, Vlad and Aleks Girshevich gigged with Arend in California leading to the birth of the trio. Documentary filmmakers are shadowing the Girshevich’s fascinated by the dynamics of the high-level father-son musical apprenticeship.

The Aleks Girshevich Trio will perform music from Tomorrow at a Bay Area gig in early August before entering the studio to record their second collection.

The compositions contained on the Aleks Girshevich Trio’s Tomorrow are:
“Strange Memories”
"Tomorrow”
“The Other Side”
“Fragility”
“Broken Promises”
“222”
“Where Were You?”
“Dithering”
Posted by Jazz Chill at 10:45 AM