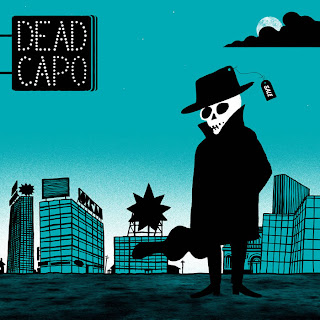 Dead Capo are a quartet that fluctuate between the classic sounds of jazz, the attitude of rock and the trepidation of surf. All of this seasoned with the cinema sounds of Rota or Morricone.

It's been ten years since their debut LP, Dísculo, made waves with the national critics in Spain. Their new album is once again surprising and the band sounds as fresh as when they started their journey at the end of the 90s. Sale combines an extraordinary energy with passages of meticulous precision and goes from wild to calm in a way that is both unexpected yet natural. Thelonius Monk, cartoons, cinematic landscapes, rock's past, Africa, surf and the ballad come together in an album as great as it is as unpredictable.
On the subject of the big gap between Dead Capo's albums, Licenciado Alfredo Martinez sheds some light: “This album solves a mystery that has been the talk of the town. I'm referring to the mysterious absence of Dead Capo. A decade ago, the instrumental combo burst onto the Madrid scene with their debut Díscolo. However, they've needed ten years for this underground, syncretistic masterpiece to continue.”

In actual fact, the members of Dead Capo were in jail for five years. They challenged the rules adopted for the Madrid Olympic bid, which prohibited performing secular songs within 250 meters of a church. They did so repeatedly, even cutting up Delito Por Bailar Chachachá, the venerable hit by the Orquesta Aragón, in what they themselves labelled "the deconstruction that our mayor deserves."

Happily, the group has benefited from the rehabilitation programs. They have performed regularly at cultural events. As representatives of Spain, they have traveled to festivals in Poland, Algeria, England and Ethiopia. Typing their name into search engines will deliver more details about these extraordinary missions of peace and harmony.

It seems that the loss of freedom enhanced the instrumental muscle of Dead Capo. Enjoying their parole, with a new line-up, Dead Capo have made an album with a revealing title: Sale. The band comes out of this with extraordinary energy, alternating between fragments of wild abandon and passages of meticulous precision.