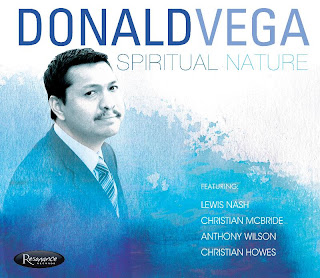 While pianist Donald Vega is beginning to draw attention in jazz circles as Mulgrew Miller's successor in the Ron Carter Trio, he makes a bold statement as a composer and bandleader on Spiritual Nature. Joined by the regal rhythm tandem of bassist Christian McBride and drummer Lewis Nash, Vega explores the marriage of jazz, Latin and classical music on his auspicious Resonance Records debut. "It's a dream come true," says the 37-year-old pianist of the opportunity to record with McBride and Nash. "Spiritually, this is my dream trio." The core trio is augmented by guitarist Anthony Wilson, violinist and label mate Christian Howes, tenor saxophonist Bob Sheppard, trumpeter Gilbert Castellanos and trombonist Bob McChesney on Vega's sophomore outing (following 2008's self-produced Tomorrows, which also featured drummer Nash).

Classically-trained in his native Nicaragua, Vega emigrated to Los Angeles at age 14 and began learning the language of jazz from mentor Billy Higgins at The World Stage and later with bassist John Clayton at the University of Southern California. Bassist Al McKibbon, a member of Dizzy Gillespie's band of the late 1940s, subsequently took the young pianist under his wing and schooled him on the bandstand on the finer points of bebop. Vega met drummer Nash while working in McKibbon's trio in Los Angeles. For Spiritual Nature, Vega imagined pairing Nash with bassist McBride, whom he had met in 2007 while attending The Juilliard School in New York. "The idea of having this tasty drummer with this killing bass player was so interesting," he says. "But for them to get together in one place, it's very rare because they're both so busy. And when we finally got together, the music just played itself, like magic."

Throughout Spiritual Nature, Vega shifts the configuration from trio to quartet to quintet, providing plenty of scintillating moments along the way. He kicks it off with the aggressively swinging, hard boppish "Scorpion," which showcases his voicings for trumpet and sax on the frontline and also features an outstanding drum solo from Nash. "I love writing harmonies," says Vega, "but most important to me is the melody. I always want it to be singable." Ron Carter's "First Trip," which originally appeared on Herbie Hancock's 1968 Blue Note classic, Speak Like a Child, is rendered here as a jaunty swinger underscored by Nash's brushwork, McBride's walking bass lines and featuring Wilson on guitar. "My attitude here was, 'OK, Herbie's version was so incredible, nobody's going to do it better than that. So let's just have some fun with it.'"

A delicate quartet rendition of Monty Alexander's lyrical "The River" features Howes on violin while the title track blends a straight eighth note jazz feel with a subtle bossa nova vibe. "You can hear the McCoy Tyner influence on my playing," says Vega, "and the tropical flavor from my country, Nicaragua. And when I hear it back, just the way it moves makes me think about the things that are unexplained - nature and the spiritual." A cover of Monty Alexander's funky boogaloo "Accompong" is highlighted by some rapid-fire exchanges between Vega's piano and Wilson's guitar while a trio interpretation of Niels Henning Orsted Pedersen's delicate waltz-time number "Future Child" opens with an extended introspective solo piano introduction from Vega. McBride's bold, walking bass lines fuel a swinging piano trio rendition of Makoto Ozone's "You Never Tell Me Anything" and on the atmospheric "Contemplation" he incorporates Fender Rhodes electric piano for a different color.

Vega's arrangement of the classical piece "Etude Opus 8, #2" by Alexander Scriabin deftly incorporates a 6/8 Afro-Cuban feel in the bass line while showcasing brisk unisons on top in a 3/4 encounter between piano and violin. "In Nicaragua, I had classical training," he explains. "I studied Chopin, Bach, Brahms, all the classics. And I always wanted to mix jazz with classical and Latin. Since I knew all of those languages, why not expand on that? And this was a perfect piece to incorporate all of those elements."

A poignant solo rendition of Antonio Carlos Jobim's "Falando De Amore-Tema De Amor" showcases the pianist's exquisite touch on the keyboard. "My all-time heroes are Hank Jones and Tommy Flanagan," says Vega. "Those are the masters I try to learn from, in terms of the touch and harmony." He explains that it was producer Klabin's idea to record three separate segments and then graft them together into one flowing piece. "When George brought in this piece, which I had never heard before, he said, 'Would you be open to doing something where you come in and record one voice, then we record a second voice and a third voice, and then put them all together?' I know Bill Evans did that on Conversations with Myself, and he was very masterful in his approach on that album. So I agreed. I'm very open and I'm always ready to learn. So George and I actually collaborated on that one."

Vega's gentle quartet number "Child's Play," which has Nash playing with his hands on the kit, carries special meaning for the new, first-time father. "I have a lot of brothers and sisters and they all just had babies too," he says. "We're all in different places - Los Angeles, Miami, New York - and in composing this tune I was imaging just having all the kids together playing. That's the image that came to mind and when the musicians were able to hear the story of where this tune came from, they knew what to play."

The album concludes with a loose, highly interactive trio rendition of Benny Golson's classic ballad "I Remember Clifford" that is underscored by Nash's signature brushwork and McBride's contrapuntal approach to the bass. "All the other tunes on the album were heavily arranged," says Vega, "so we wanted just one tune where we don't have to read, we don't have any arrangement, we just play. Benny Golson's writing is great and we all knew this tune, so the idea was, 'Let's just go in and play.' And you can hear that kind of looseness on this track."

Backed by such a formidable lineup, Vega makes a giant leap as a composer-arranger and bandleader in his own right on Spiritual Nature.