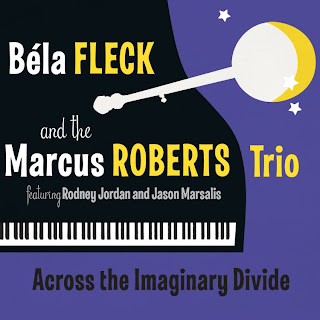 When long time Marcus Roberts fan and banjo virtuoso, Béla Fleck stayed late at a Savannah Music Festival jam session just to hear Roberts play, the last thing he expected was to be up on stage performing with him and his band but “it seemed to work instantly. Marcus seemed to really like it. And the 20 or so people at the jam session seemed to think that something very special had just occurred.”

A year later they had agreed to perform together for the first time at the same festival in Savannah. “We threw together a set of music, and played it for a packed and intrigued crowd. The gig was honestly amazing. There was a natural rapport between Marcus and me from the first note, and Jason Marsalis (on drums) and Rodney Jordan (on bass) were just incredible. I loved their trio conception, and was thrilled to be able to find a way to exist within it,” said Fleck.

The Marcus Roberts Trio is known for its virtuosic style – a style that is strongly rhythmic, melodic, and filled with dynamic contrast. The group was founded in 1995, and they are known around the world for their signature trio style. Béla Fleck is often considered the premier banjo player in the world. He has virtually reinvented the image and the sound of the banjo through a remarkable performing and recording career that has taken him all over the musical map and on a range of solo projects and collaborations. “It was a lot of fun working with Béla on this project. He has a limitless imagination and, like our trio, he is willing to do whatever it takes to make a great record. The recording brings our two styles together in a way that I think will be really enjoyable for the listeners,” said Roberts.

Across The Imaginary Divide, out June 5 on Rounder, was produced by Béla Fleck and Marcus Roberts.
Track Listing:
1. Some Roads Lead Home
2. I'm Gonna Tell You This Story One More Time
3. Across the Imaginary Divide
4. Let Me Show You What to Do
5. Petunia
6. Topaika
7. One Blue Truth
8. Let's Go
9. Kalimba
10. The Sunshine And The Moonlight
11. That Old Thing
12. That Ragtime Feeling

~ thejazznetworkworldwide.com
Posted by Jazz Chill at 11:07 AM