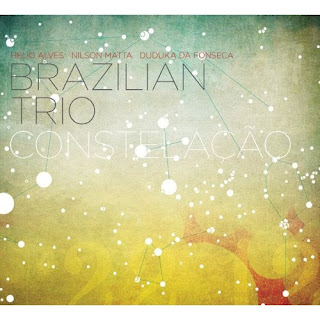 Brazilian Trio is a masterful amalgamation of musician, composer and arranger friends dedicated to perpetuating the artful blend of Brazilian classical music and jazz. The trio consists of pianist Helio Alves, bassist Nilson Matta and drummer Duduka Da Fonseca. Their 2009 debut CD, Forests, netted them a coveted Grammy nomination for Best Latin Jazz Album right off the bat, validating their musical mission with passion and appreciation. For their eagerly awaited sophomore follow up, the Trio has moved to Motema Music for Constelação (pronounced “cohn stay lah sow” - “constellation” in Portuguese). Divinely showcasing each player with an original composition apiece plus uniquely engaging renditions of fine pieces ranging from Brazilian composers such as Tenorio Jr. and the great Antonio Carlos Jobim to jazz stalwart Cedar Walton, the 10-song album picks up from where the earthy Forests left off…and gracefully ascends skyward. This music is deep enough to impress connoisseurs of Brazilian music while appealing to casual music lovers that simply adore the sound of beautiful masterfully rendered tunes.

“There are two hallmarks of Brazilian music,” Matta explains, “melody and rhythm. But improvisation requires knowledge of the language of jazz. We’re thinking in 2/4 but we use the info that we get from jazz. This way the music keeps growing. It’s the new direction of playing Brazilian Music.”

The album title was inspired by the evocative title of the opening number “Constelação” composed by Alfredo Cardim (with a lyric unheard here by Dee Dee McNeil). This had a lot to do with the Cruz constellation, which is among the most prevalent in the sky over Brazil. So symbolic is this cross-shaped constellation that it was integrated into the design of Brazil’s national flag, reflecting a deep connection to spirituality.

Each member of Brazilian Trio contributed an inspired composition to the project. Duduka’s piece is the enchanting “Isabella” – “a lil’ waltz for a lil’ flower,” he shares with pride, “my daughter Isabella. She is 14.” Similarly, Helio’s piece “Bebe” is for a very special lady in his life. “I wrote ‘Bebe’ a while ago for my wife, Ellen. I originally recorded it on my first album, Trios (Reservoir Records – 1998) with Al Foster on drums and John Patitucci on bass. It had a more straight-ahead jazz feel then. Now it’s a more Brazilian feel in ¾ over which I was able to take more liberties. I’m a totally different player now and I really appreciate the fresh approach with Nilson and Duduka.”

Nilson brought the medley “LVM/Direto Ao Assunto” to the table – two songs from two different times in his life that fit together here like a hand in glove. “’Direto Ao Assunto,’ which means ‘straight to the point,’ is a short piece I composed around `72/`73 when I was still living in Brazil. I named it that because though it’s difficult to play it’s simple in sound. ‘LVM,’ which are the initials of my wife Luisa and my sons Victor and Maico, is a song I composed in Yellow Springs, Pennsylvania when I was just starting with Don Pullen’s band. He insisted that we each write something for the group. My surroundings inspired that ballad and now it has become the introduction for this song – two songs in one.”

Regarding the approach to recording Constelação, Helio (softly pronounced ay-lee-oh) states, “We stayed close to the format of the last album…even recording in the same studio (Avatar in New York City). Because our histories and origins are so similar, we work well together.” Duduka adds, “We started rehearsing at Nilson’s house in New Jersey. We all had ideas. We filtered, discussed, then after several rehearsals we had the final repertoire that we were all happy with. We recorded and produced the album ourselves. We’ve developed a great deal of empathy, growing more and more refined. We’re evolving every time we play.”

That empathy is in magnificent evidence on several compositions by the legendary Brazilian composer Antonio Carlos Jobim. Though Brazilian Trio strives to also highlight lesser-known national treasures, there’s simply no getting around the prolific “Tom” Jobim. The group tackles three of his pieces this time; “O Bôto,” “Quebra Pedra” and “Luiza.” Helio remarks, “‘Luiza” is one of his most beautiful melodies…so gorgeous. The guys agreed right away to do it. When Jobim recorded it he sang it and even though his voice was not the greatest it was still so very moving because of the melody. The guy just had so many incredible songs.” Nilson marvels, “Jobim surprises us all the time. On ‘Quebra Pedra,’ the bass plays the fifth (of the chord)! It’s a very intricate rhythm with a catchy yet complicated melody. These three songs are each completely different. These selections prove that Tom’s capacity was very broad but his personality is always present.”

The most familiar song of this set belongs to the great Dorival Caymmi and is titled “O Cantador,” better known in America by the version with English lyrics entitled “Like a Lover” (made famous by Sergio Mendes and Brazil `66 from their LP Look Around). The original Portuguese lyric was penned by nelson Motta (NOT to be confused with B.T. bassist Nilson Matta). Brazilian Trio’s version of this dreamy ballad is breathtakingly tender - lovely and light as a feather.

Brazilian Trio also digs into the 1964 bossa jazz classic “Embalo” by unsung Brazilian pianist Tenorio Jr. as well as the album-closing “Bolivia” - the surprisingly syncopated, South American favored and most famous composition from the pen of American jazz great Cedar Walton. The latter opens with a commanding drum solo by Duduka that drops down into one of the hippest swing grooves ever. Constelação is nothing short of a triumph for the group which is now well on its way to establishing itself as ambassadors of the music.

The story of Brazilian Trio begins in Rio de Janiero circa the early `70s when Duduka Da Fonseca (born in Rio) and Nilson Matta (born in Sao Paulo) met playing soccer with a loose gathering of other musician friends in a little field every Wednesday. Both men knew of and respected each other as players but were so busy with separate gigs that they never got a chance to collaborate while in Rio. In1975. Duduka came to America to make a living as a jazz musician in New York City. Ten years later Nilson also made the move to New York and with Duduka began playing in bands with greats including globetrotter Herbie Mann.

Helio Alves (born in Sao Paulo) came to the United States initially to study music at the Berklee College of Music in Boston. Brazilian trumpeter Claudio Roditi was very excited about his progress and encouraged him to move to New York. Once there in 1993, Helio met Duduka and Nilson and the three of them began playing together. Brazilian Trio officially began informally when they took up a weekly residency gig at a little club the West Side of Union Square. They played steadily together over several years just the three of them as well as at the service of jazz royalty like the late, great saxophonist Joe Henderson.

Brazilian trio recorded its first album, Forests, in 2009, selling a lot of CDs over in Europe and netting a Grammy nomination here in the U.S. They will now build on the momentum with the transfixing music of Constelação.

“So many composers, known and obscure, have contributed to the richness of the Bossa Nova movement,” Duduka concludes. “In late `50s, Samba Jazz was also created. Gentlemen like (Brazilian drummer/percussion great) Dom Um Romao were also listening to Horace Silver, Art Blakey & The Jazz Messengers, Coltrane and Miles, so they had a parallel vibe going on. Mix in the classical influence from Bach, Debussy and Ravel, and you get the musical direction that Brazilian Trio is dedicated to carrying forward for many years to come.”