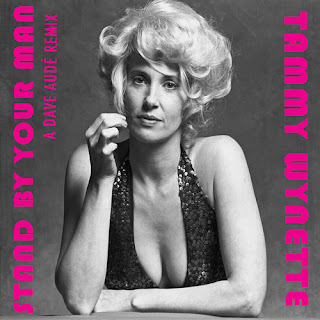 “Stand By Your Man” is the signature track by Wynette (b. May 5, 1942 - d. April 6, 1998), acknowledged as “The First Lady Of Country Music” by The Country Music Hall of Fame. It remains an American classic in 2012, more than a third of a century after its release in October 1968. Dave Audé brings a new attitude to the song, transforming it into a red-hot dance track which is the equal to his memorable remixes for Madonna, Sting, Lady Gaga, Katy Perry, Ke$ha, Jennifer Lopez, Kelly Clarkson, Britney Spears, Beyoncé, U2, and Coldplay, to name a few. Since 1996, Audé has amassed an unprecedented 75+ #1 Billboard tracks. “Stand By Your Man” is Executive Produced by Fletcher Foster and Darrell Brown.

The Dave Audé remixes are the first major chart contenders by Tammy Wynette since 1991, when British rave sensations The KLF invited her to sing on their left-field pop hit “Justified and Ancient (Stand By the JAMs).” The track hit #2 Dance in Billboard, #11 on the Hot 100, and went to #1 in 18 countries.

In 1968, “Stand By Your Man” followed the similarly controversial “D-I-V-O-R-C-E” and both topped the Billboard Country charts that year. “Stand By Your Man” went on to win the Grammy Award® for Best Female Country Vocal, the second of Tammy's two Grammy Awards®. The song was inducted into the Grammy® Hall Of Fame in 1999, and was selected by the Library Of Congress in 2010, for addition to the National Recording Registry.

At the dawn of the feminist revolution in the late 1960s, “Stand By Your Man” and “D-I-V-O-R-C-E” stirred up emotions on all sides of the fence, and solidified the standing of Tammy Wynette in American culture. It certainly paved the way for her third consecutive honor as the Country Music Association's (CMA) Female Vocalist Of the Year, which she won in 1968 (the second year of the awards), 1969, and 1970. That track record was Tammy's alone for nearly two decades, until Reba McEntire finally broke it in 1987 with a fourth consecutive win.

The legend of Mississippi farm girl Virginia Wynette Pugh is inscribed on the American psyche -- married at 17 and a divorced mother of three daughters before she reached 21. Her voice, a soulful confession choked out in a heart-wrenching tumble of emotion, brought her to the attention of CBS Records Nashville producer Billy Sherrill, who signed the 24-year-old to Epic Records in 1966. Sherrill thought her blond ponytail reminded him of the Debbie Reynolds movie Tammy and the Bachelor, and the rest is history.

In less than a year, her third chart single (“My Elusive Dreams,” a duet with David Houston) became the first of 20 singles to hit #1 on the Billboard Country chart for Tammy over the next decade. Her career encompassed 11 consecutive #1 country LPs and worldwide sales of more than 30 million albums. As a cornerstone of the Epic roster, her marriage to George Jones in 1969 (the year after Johnny Cash and June Carter were wed) was a union of country royalty.

Tammy Wynette is acknowledged as the first American country artist to earn an RIAA platinum million-selling LP (1969's Greatest Hits) and was one of the first country acts to tour inter¬nationally on a regular basis. Every new generation has awakened to her indomitable presence. In that perennial process of re-discovery lies the magic of Tammy Wynette's spirit.