ABIAH - LIFE AS A BALLAD 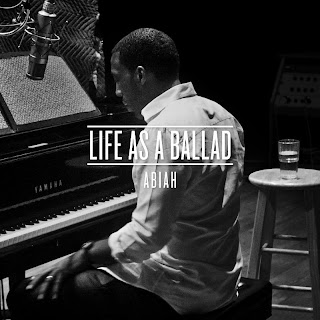 "...a singer with an innate ability for passionate songwriting that one cannot learn." - Billboard Magazine

Ever since the untimely departure of Luther Vandross, the American pop scene has been absent of a Black American male balladeer possessed of chops beyond belief, staunch lyricism and emotional maturity. Abiah (pronounced Ah-bee-yah) more than adequately answers the call of that absence with an album and a presence that is sensuous, soulful, honest, grown-up and quite passionate about restoring vocal excellence to the contemporary airwaves.

Who is Abiah? These are the bare facts: he is a seasoned balladeer possessed of a five-and a half octave range; an established vocal coach and former Universal Republic recording artist; and he is of Ghanaian, Cuban, Native American descent, though raised in Rochester, NY.

While that background remains a part of his roots and identity, 2012 marks a musical, professional and personal evolution for the singer-songwriter. Previously known as "Jeremiah" in the music world (full name Jeremiah Abiah, the latter of which means 'God is my father'), Abiah sets forth his highly anticipated sophomore album, Life As A Ballad, reflective of a long journey towards his intensely personal sound and overall musical growth - consisting of nine self-penned originals.

Growing up in a musical home - his mother an accomplished concert pianist - induced a love for learning about the nuances of the singer's art and craft that found him studying at the Eastman School of Music as a young teen where he studied with legendary chanteuse Renee Fleming's mother, Patricia Alexander. Afterwards came enrollment at Syracuse University and The New England Conservatory for operatic training. Abiah's pre-undergraduate obligations were completed while on the road, where he quickly found work as a backing vocalist for George Michael and while in college he also landed a steady gig with Yolanda Adams.

"There was a moment when I thought I had lost my voice. "I was experiencing growing pains which were hard to decipher at first but eventually they helped me to trust my heart, sound and aesthetic again. I thought I would never record again. I even toyed with the idea but the music perpetually tugged at me. Changing my stage name was the impetus of a new beginning," reflects Abiah. "This is how Life As A Ballad was born as I dealt with the idea of finding beauty in the dark, that glimmer of light when all hope seemed lost."

A move to New York City in the early 2000s saw Abiah "hitting the pavement hard'' and eventually playing Central Park SummerStage and the world renowned Blue Note on a regular basis; though a turning point came when Abiah started gaining the attention of major labels. As is frequently the case for ambitious but not yet quite industry-savvy young artists, Abiah's fledgling recordings fell through the cracks. An entire album, brought to the verge of a major label deal, got shelved because the song the major label executives favored most was the only one not produced by a very major and deservedly much lauded producer.

"I'm not opposed to major labels. I just believe an artist needs to keep his finger on the pulse of everything. It's hard to be artist and business, but it is necessary," said Abiah. "Initially I was angry and came out pointing fingers but the healthier aspect became, what did or didn't I do? Taking that responsibility has given me power and greater perspective."

While plotting his next round of moves, creatively and professionally (following his major label departure) Abiah got practically handed an unexpected cottage industry, when he became an in-demand vocal coach, even featured on MTV's program, MADE. Initial inquiries from singer-friends impressed by his sound and range has blossomed into a side-business that finds him coaching up-and-comers prepping for demos and showcases, solid pros hankering to rise up to that proverbial next level, and musical game show contestants hoping to impress celebrity judges with noticeably increased prowess.

This recording is the result of Abiah's steady and patient march over a decade in New York, finding the perfect songs and session mates to support his vision. Like any astute young artist in pursuit of a unique bespoke career path, Abiah wisely sought out collaborators who were of highly skilled and veteran pedigrees, and of course, simpatico. Notable among those collaborators are very well regarded young pianist Robert Glasper, who is Abiah's cousin who he met in earlier days while they cut their musical teeth in the New York's music landscape. Marvin Sewell, the album's stellar guitarist, has been a frequent flyer in Cassandra Wilson's ensemble since the late 1990s as well as Jack DeJohnette.

The captivating warmth of Abiah's voice can be heard all over Life As A Ballad. In addition to his phenomenal range, he is an incredibly acute interpreter, composer and producer. Across the album's nine tracks, he can be heard moving from crooning conversational whispers to heartfelt sighs of ecstasy. The title track was written in just 15 minutes after inspiration struck in a chance encounter with The Oprah Winfrey Show, during which the widow of Steve Irwin says, "When he left, the wind stopped moving." On a more uplifting track, Abiah's range can also be felt again on "Doves, a flirtatious cascading adaptation of a Prince classic, "When Doves Cry," entrenched in global harmonics.

The album's gorgeous opener, "September'', is a well orchestrated mélange of achingly mature lyric writing, full throated, flowing and tautly controlled vocal drama, lush Beatles-esque harmonies and transcendent, transporting melodicism. The artist's intention to have his music move people poignantly within are generously on display, as well as in "Foolish Heart", which Abiah describes as "achingly beautiful," and "the most personal song on the record."

Ultimately, Life As A Ballad designates Abiah as a contender for that sizable niche slice of today's market known as Adult Contemporary - the same slice where equally well-honed, melodious and crafty modern male vocalists like Michael Bublé, Jason Mraz, Sting, Seal and occasionally even Robin Thicke are seen to reside.

Life As A Ballad also features Robert Glasper, Marvin Sewell, Keith Witty,  Ulysses Owens, Jr., among others and is set for release on August 28 on Madoh Music.