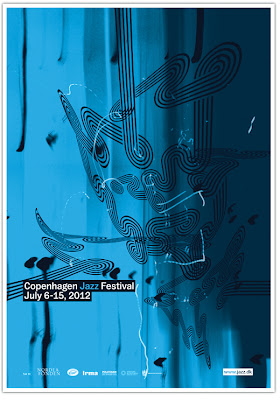 At a recent press conference at Hofteatret The Copenhagen Jazz Festival announced the final lineup for the 2012 Festival, taking place July 6-15. With a record-breaking number of concerts, the well-respected Festival is bigger and more diverse than ever.
This year's headliners include jazz greats such as Brad Mehldau, Wayne Shorter, Jim Hall, Joe Lovano and John Scofield, as well as world music stars like Anoushka Shankar, Tony Allen and Concha Buika. True to tradition the festival also features artists one wouldn't normally label jazz - among them Neneh Cherry, Nosaj Thing, Mikael Simpson and Choir of Young Believers. The latter will perform a special expanded version of their critically acclaimed record "Rhine Gold" at The Royal Theater's Old Stage - this year's most used concert hall venue with a total of five concerts. Koncerthuset will host two concerts during the festival, inviting people in for musical treats by Anoushka Shankar and Caroline Henderson.

Like previous years the festival will feature a handful of themes, each representing entrance points to the expansive programme. One of these - titled 21st Century Jazz - will take the pulse of modern jazz in the newly reopened Jazzhouse and present new American names like trumpeter Ambrose Akinmusire and pianist Gerald Clayton, as well as Nordic forces like trumpeter Goran Kajfes and avant-garde trio The Thing (with Neneh Cherry). Jazzhouse will also house concerts with Britain's Portico Quartet and James Blackshaw, Australian trio, The Necks, and the Japanese vocal phenomenon, Koichi Makigami, besides the main attraction: A two night tribute to the legendary Wayne Shorter by a superb quintet lead by Joe Lovano and Dave Douglas.

As the name suggests, the theme Something Else presents something completely different. Teitur, Hymns from Nineveh and Mikael Simpson will no doubt have the jazz police combat-ready and fully armed - unless of course they chose to patrol Carlsberg to make sure the returning theme Classic Jazz Tributes goes down without any disturbances.

Another of the festival's most beloved themes has also gotten a reelection: Jazz by the Sea at Kulturhuset Islands Brygge will host names such as Sinne Eeg, Bassekou Kouyate, Concha Buika and Ibrahim Electric.

The world music theme in Pressen at Politikens Hus has moved one continent west from last year's The Sound Of Africa and taken a new name: The Sound of Brazil. Here you can move your feet to the sound of legendary Milton Nascimento, while Statens Museum for Kunst hosts State Sessions indoor and Jazz for Kids in Østre Anlæg just on the other side of the window. For the first time the festival's youngest audience will also find jazz directed at them in Lindevangsparken at Frederiksberg.

A great number of new venues have been added to this year's festival. A few mentionable are Hofteatret where leading Danish jazz profiles like Jakob Bro, Lotte Anker, Simon Toldam and Jacob Anderskov can be heard with special projects featuring international jazz legends, while Teatret ved Sorte Hest will open its doors for a single night of avant-garde madness by John Cage performedby a special ensemble lead by Søren Kjærgaard, and Betty Nansen will offer concerts by Lee Konitz and Brian Blade Fellowship Band. And of course the city will brim with free concerts at Kongens Have, Sankt Hans Torv, Gråbrødre Torv, Vandkunsten, Østerfælled Torv, and Ofelia Beach among others, just as you once again can climb The Red Roof at DGI-byen for another treat of Jazz Remixed.

The 34th rendition will, in other words, span local and hip establishments, the city squares, streets and parks, the jazz clubs and major concert halls. The venue list totals approximately 110 excited venues spread out over the whole of the city, Valby, Frederiksberg, and Amager.