THE SHAOLIN AFRONAUTS - QUEST UNDER CAPRICORN 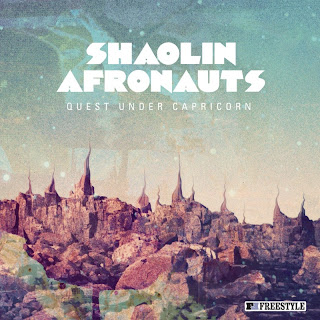 London's Freestyle Records bring us a new 12-inch from South Australian afrobeat/jazz band, The Shaolin Afronauts. The 12-inch (Brooklyn), which will also be available as a digital download, contains the lead-track from their upcoming album, Quest Under Capricorn, on the a-side, and a live recording of a track from their previous album on the b-side.

2011's debut album from The Shaolin Afronauts, Flight Of The Ancients, was a critical and commercial success story. Lauded as a truly original blend of the sounds of 1970's West Africa, Ethiopia and the pioneering and progressive avant-garde jazz artists of the same period, Flight Of The Ancients went onto be nominated for several music awards, including the 25th Aria Fine Arts Awards.

This new single, Brooklyn, displays the band's musical progression. Whilst the multi layered afro rhythms remain, as well as the hypnotic horns and melodic interplay, the soulful, jazz inspired harmony has been taken up several levels to quite a stunning effect.

The b-side of this limited edition 12-inch single is a very special live version of Kilimanjaro, which was recorded in January 2012 at the Adelaide Festival Centre, Space Theatre with an expanded 18-piece line up as The Shaolin Afronauts Ensemble. This track is not included on the forthcoming new album and is a totally exclusive to this single.

Tracklisting:
A. Brooklyn
B. Kilimanjaro (Live)