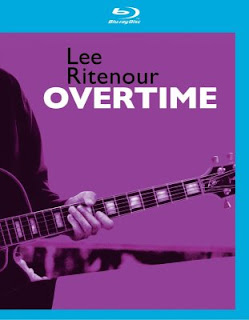 Overtime is a tour-de-force of jam-happy proportions as the guitarist is placed in a variety of environments that show off his extraordinary skill of adapting to each and every genre-specific moment. From the soulful funk of The Temptations’ “Papa Was A Rolling Stone” to a stunning set of Brazilian samba to the jazz-rock fusion of his early days, Rit rocks, swings, and rolls in a progressive mélange of satisfying chops and intelligence.

There’s an innate feel in these grooves that one cannot only respond to intellectually but viscerally…in the gut. The songs are culled from 1977’s Captain Fingers, 1978’s Captain’s Journey, 1981’s Rit, 1988’s Festival, 1992’s Wes Bound (a tribute to the legendary guitarist Wes Montgomery) and 2003’s Twist Of Motown.

Lee Ritenour has spiced up sessions and stages for everyone from Tony Bennett, Lena Horne and Steely Dan to Pink Floyd and Dizzy Gillespie. He’s been at the forefront of fusion, has crafted cool improvisations in the mode of Miles Davis, contributed to super-group Fourplay and has made pop inroads into Brazilian music. Throughout Ritenour’s 30-album career, his individuality and resourcefulness always shines through.