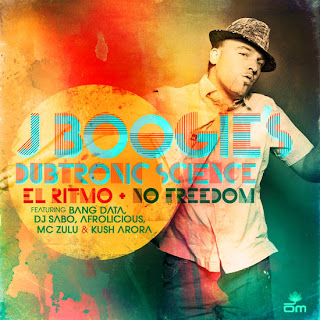 Constantly revolutionizing the game, creating new sounds, and always keeping fans on their feet, J-Boogie continues to lift music to its full potential through his distinct approach and one-of-a-kind style.

He’s delivered his masterful mix of culture, soul, rhythm and beats both at home in the Bay Area through his award-winning radio program “Beatsauce” on KUSF, and around the globe spinning DJ sets in countries like Colombia, India, Japan, and Spain. J-Boogie’s local success has earned him awards such as “SF’s Best Club DJ” by SF Weekly, “SF’s Best Radio & Club DJ” by citysearch.com and “Best Hip–Hop Radio Show” by SF Bay Guardian. His global success has earned him acclaim and opportunities worldwide, including spots on radio and television both here and abroad, sportswear sponsorships, and the opportunity to DJ the Tokyo Dome for an NFL football game.

Throughout the years, J-Boogie has also provided musical ecstasy for millions, blowing it up on the festival circuit at Coachella, Bonnaroo, Treasure Island Music Fest, Outside Lands, Lightning in a Bottle, Bumbershoot, SXSW, WMC, Harmony Fest, Earthdance, High Sierra, Sundance Film Fest, The Winter Olympics 2010, Power to the Peaceful and Burning Man. By popular demand, J-Boogie’s DJ skills have landed him bookings in world-class clubs such as Turntables on the Hudson, APT, Deep Space NYC, 18th Street Lounge, Halo, Temple Bar, Afro Funke, Root Down, Firecracker, The Do Over and Deep LA. He has also graced the stage on tour with Widespread Panic, Bassnectar and Spearhead, and has opened for legends like George Clinton & Parliament Funkadelic, Mark Farina, Louie Vega, DJ Krush, Kruder & Dorfmeister, Breakestra, RJD2, Herbaliser, and Nickodemus.

J-Boogie’s widespread success and longevity in the music industry can be attributed to his exceptional style and ability to constantly revolutionize music. As one of the first DJs to incorporate musicians and vocalists into a live band / DJ fusion set, J-Boogie has truly redefined what it means to be a DJ. With this groundbreaking concept, J-Boogie has created a new realm of live performance and a new type of record. J-Boogie brings this exclusive style to life with his band “Dubtronic Science” in live sets as well as in their self-titled debut album that dropped in 2003, featuring artists like Goapele, Gina Rene, People Under the Stairs, Capitol A and Tony Moses.

J-Boogie has also contributed his genius sounds to a wide array of mix tapes, remixes, and albums. He has released remixes for artists such as Widespread Panic, Nickodemus, DJ Vadim, Alice Russell, Miguel Migs, Vieux Farka Toure, Karsh Kale, The Rebirth, Zeph & Azeem, Mark Farina, Zion I, Goapele and Soulstice, and has been featured on Mark Farina’s Mushroom Jazz 5 & 6, Om Lounge series, Ubiquity compilations and remix projects. His mix CD series Leftism, In the Mood, Electro Soul and Universal B Breaks have all become collectors’ items at music boutiques.

J-Boogie’s vast contributions to the music world and his ongoing commitment to his own projects as well as the projects of other artists have allowed him to make fans and friends out of some of the most respected artists in the industry. The game’s most esteemed DJs are already buzzing about J-Boogie’s newest creation, and always have nothing but the best to say about not only his work, but his character as well.
~ jboogie.com

His latest are two new remixes from the most recent Undercover album. The swinging horns of cumbia tinged “El Ritmo” are traded for a bouncy reggaeton remix by DJ Sabo, and the tropical afrobeat influenced “No Freedom” gets blasted into outerspace thanks to Kush Arora.
Posted by Jazz Chill at 1:25 PM