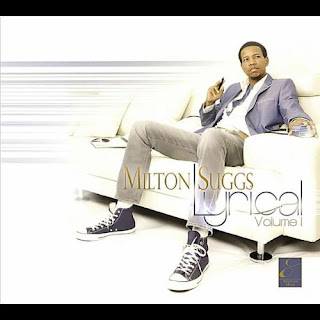 In 2010 with his debut album as a leader, Things to Come, vocalist Milton Suggs established himself as an artist to be aware of and watch closely. He cements that idea with a strong showing in 2012 with the first volume in an anticipated series of albums simply and appropriately entitled, Lyrical.

Lyrical, Volume I was recorded in late 2011 and early in 2012 with some fine instrumental talent out of the midwest. Detroit pianist Michael Jellick, bassist Joshua Ramos, and drummer Greg Artry comprise the rhythm section while several talented horn players including trumpeters Corey Wilkes and Marquis Hill, as well as saxophonist Christopher McBride make strong statements as soloists.

True to its title, the album’s repertoire consists of arrangements by Milton Suggs of compositions from some of the most beloved musicians and composers in jazz all with original lyrics by Suggs. The album opens with three Wayne Shorter compositions: first, the powerful war-like anthem “Before It’s Too Late” (originally called “Armageddon”), followed by “Walking Out” (“Footprints”), before winding down to a moving ballad in “Jayme’s Song” (“Infant Eyes”), a father’s ode to his newborn daughter.

The musical as well as lyrical content of this album is an eclectic display of different styles as well as subject matter. With styles ranging from straight ahead swing, to bossa, to R&B influenced grooves, Suggs offers the diversity and accessibility that is coming to define his work. A self proclaimed romantic, he approaches the subject of love from many different angles; from laments of loss in songs such as “Only A Memory” (based on Lee Morgan’s “Ceora”) to praises of adoration in songs like “Side by Side” (based on Benny Golson’s ever popular “Stablemates”) his words go a long way in illustrating love’s complexity and vastness.

It has been two years since the release of Milton’s acclaimed debut album, Things to Come, and between now and then he certainly hasn’t been resting on his laurels. In addition to performing throughout the country in places such as The Kennedy Center in Washington D.C., Milton has been writing. Not only has he been building a catalogue of original music for later recording and release, but he has also spent much of his time crafting lyrics to the melodies of many of his favorite well known and lesser known jazz compositions to be released on subsequent volumes.

Writing is something for which Milton discovered a fondness at an early age. “I was probably in the third grade, around eight years old, when I found a book of poetry at a family member’s house,” recalls Suggs. “I read this one poem ‘She Walks in Beauty like the Night’ and I was mesmerized. From then on I was trying to write love poetry. When music came into the picture I began to understand how when great melodies are paired with honest and meaningful lyrics, the best of both worlds come together and create something new and special.” It is only fitting that an album like Lyrical is being released when it is. We were given a preview of Milton’s prowess as a lyricist on his previous album, and now it is being displayed on a larger scale.

“Things to Come was my manifesto, a declaration of some of the directions I intend to go in my career. So I’ve really been taking to time to see those goals through to fulfillment,” Suggs says.

“There is so much great music out there that the possibilities seem endless when it comes to putting words to melodies. I really enjoyed the project because it gives me the opportunity to step away from writing music and really focus on my appreciation for these great tunes by other artists.”

While the elder statesmen such as Wayne Shorter, Cedar Walton, and Benny Golson have provided Suggs with much lyrical inspiration, he also shows appreciation for a younger generation of artists such as trumpeter Roy Hargrove. “Joy Enough to Spare” is a lyrical treatment of Hargrove’s “Joy is Sorrow Unmasked” from his 2008 album Earfood. Not only does Suggs provide a warm vocal on this track, but he also accompanies himself on piano.

While the influence of masters such as Eddie Jefferson and Jon Hendricks was apparent with his previous album, Suggs adds a new dimension to his vocal styling that reflects the influence of soul singers Donny Hathaway and Marvin Gaye and even groups such as the Chi-lites and Blue Magic. “Of course soul is much of what I grew up listening to, so I wanted to explore possibilities of pairing some of those vocal recording techniques with the jazz standards,” Suggs says. On many songs from this album, Milton provides his own background vocal accompaniment, something that is not typically heard among jazz vocalists.

Milton’s soul music influence comes to life in the vibrant “Will You Fly with Me”, an R&B style song based on Tadd Dameron’s “Lady Bird” and Miles Davis’s “Half Nelson” with a track from producer and vibraphonist Justin “Justefan” Thomas. With a stunning solo from pianist Michael Jellick, this particular song offers what might be considered a more contemporary spin to an ever popular jazz classic.

When asked what possibilities might lie ahead within his career Suggs had this to say, “I definitely intend to keep putting out volumes of the Lyrical series, but for my next immediate project I would like to do an album of all original compositions. But for now I’ll just focus on making sure this album gets heard.” With a combination of great tunes, solid arrangements, exceptional vocals, and great lyrics accomplishing that goal should not be a problem.
Posted by Jazz Chill at 1:31 PM