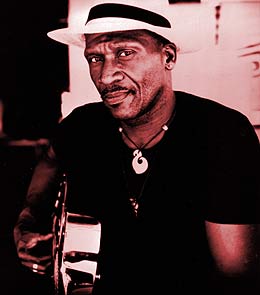 The label will celebrate the groundbreaking artist with a major catalog reissue project beginning with the release of the newly-curated The Hidden Treasures of Taj Mahal 1969-1973, an extraordinary two-disc collection of previously unreleased studio and live performances, available Tuesday August 21.

The Hidden Treasures of Taj Mahal 1969-1973 is the first release in an ongoing catalog project which includes plans to release definitive editions of the artist's entire Columbia Records catalog.
"Throughout my more than 40 years of recording, I have always been an outside-the-box composer/musician/performer and not always understood by the music industry, so it gives me a phenomenal amount of personal pleasure to have Sony/Legacy reissue my whole catalog of music!

This is fabulous news for the legions of fans who have always been unfailingly loyal to me and this music we've shared for the duration of a wonderful and (thank you very much) still on-going career of touring and playing live for fans around the world!," said Taj Mahal. "This excitement is amplified even more for everyone (me included) by the first-time release of an excellent live concert from Royal Albert Hall in London, England and an album of never before released studio musical gems!

I'm thrilled that this music is finally coming to the light of day! So go for it babies! Listen and dance your (bleep) off to the music we love so much and glad there's more where that came from! I made the music of my heart and y'all helped!!"

Born Henry St. Clair Fredericks, Jr. in Harlem, New York, on May 17, 1942, Taj Mahal has created an inimitable and enduring body of work, a bedrock blues flavored with strains of West Indian, Caribbean and African music with elements of jazz, rock and reggae flowing effortlessly through the mix. A two-time Grammy winner, Taj Mahal opened the untapped potential of the Delta Blues, felt the connection to African soul and island rhythms, and became one of world music's first proponents and champions.