DENNIS ANGEL - RIO ON MY MIND 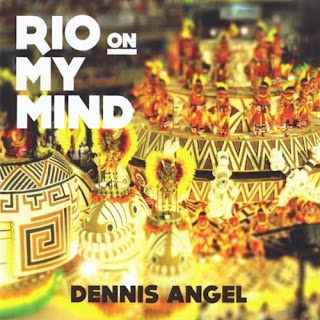 New York horn player extraordinaire Dennis Angel has definitely caught our attention with his first single release… the title track… from his upcoming Rio On My Mind album. Enlisting the World-class top drawer talents of veteran producer and keyboardist Jason Miles (Miles Davis, Michael Jackson, Luther Vandross), master guitarist Romero Lubambo (Dizzy Gillespie, Diana Krall), acoustic bassist Amanda Ruzza (Arturo O’Farrill, Kevin Mahogany) and drummer Brian Dunne (Hall & Oates, AWB), Mr. Angel has crafted a captivating and spirited original Brazilian contemporary jazz tune that’s an enticingly perfect introduction to what promises to be an outstanding collection of new music from this master of the trumpet and flugelhorn. This is the kind of song that will definitely take you on a sun-splashed musical journey to tropical locations like Sugarloaf Mountain and Copacabana Beach, and certainly makes one eager to hear what else Dennis Angel’s thinking musically, with Rio on his mind!

The Dennis Angel Band consists of Dennis Angel on trumpet, Gottfried Stoger on sax and flute, David Shaich on bass, Joel Mofsenson on piano, Mike Campenni on drums, and DeForest Raphael on vocals. Grammy nominated guitarist Gil Parris and Dennis’ sixteen year old daughter Rebecca can be heard on many of their recent recordings. The group’s first song that attained national recognition was “The Wall Street Recession Time Blues” which was played on many blues and folk radio stations at the height of The Wall Street meltdown. It was also the subject of a feature article in the “Boston Herald” on Labor Day 2009. The group has had a string of successes on Smooth Jazz stations and charts beginning in the summer of 2010 with songs such as “From Bebop to Hip Hop” and later “I Need Smooth Jazz”, “Dizzy Izzy” and “My Favorite Time of the Year”. The band has played at various venues including Iridium and The Triad in Manhattan, and The Watercolor Café, ZaZa’s and The Manor Club in Westchester.