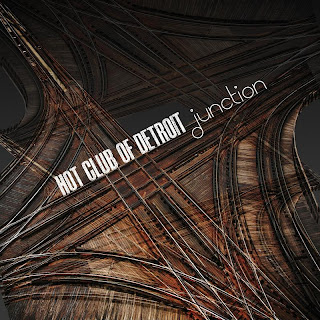 Following up It's About That Time, Night Town and the eponymous 2006 debut Hot Club of Detroit - Hot Club of Detroit expands its sonic and compositional horizons with Junction. Retaining its original lineup of reeds, two guitars, accordion, upright bass and no drums, this is the band's fourth release for Mack Avenue Records. There are personnel changes, however, and for the first time, the Hot Club of Detroit is joined (on three tracks) by a vocalist: French musician Cyrille Aimée, a native of Django Reinhardt's hometown and third-place winner of the 2010 Thelonious Monk International Vocal Competition.


Junction's sound is at once vintage and boldly new, rooted in the legacy of Django Reinhardt but also the sensibilities of Ornette Coleman, Pat Metheny, John Zorn and even the rock band Phish. Far from a traditional gypsy jazz ensemble, Hot Club of Detroit (HCOD) proves itself a versatile modern jazz group, with a unique acoustic-electric sound that surges past expectations and genre boundaries.

"A lot of bands that model themselves after the Hot Club of France are now working with drummers, or percussion of some sort," says HCOD rhythm guitarist Paul Brady. "We never have. And by doing that it forces us to think creatively about what we can do without it. How can we approach odd meter, how can we approach certain grooves? Regardless of what a drummer can add, that absence to me is interesting and different."

Unfortunately, Junction comes at a difficult time. HCOD bassist Andrew Kratzat and his fiancée were both seriously injured in an auto accident in July 2011, and are currently on a long road to recovery. "This album is a dedication to both of them," declares Brady. "It's been tough for us, musically but also emotionally," adds HCOD accordionist Julien Labro. "Andrew is like a brother, a family member. But we're still hopeful, and one day I'm sure he'll be back to playing."

Irabagon is assertive from the start, contributing his own "Goodbye Mr. Anderson" as the album opener. (The title comes from The Matrix, the chords to an extent from Bobby Hebb's "Sunny" and John Coltrane.) The writing partnership of Labro and lead guitarist Evan Perri is also central to the album's sound. From their rich creative exchange comes the flowing soprano sax/accordina melody of "Song For Gabriel" (named for pop legend Peter Gabriel); the Pat Metheny-esque 6/8 time of "Junction"; and the French-style waltz "Midnight in Detroit" (a parallel to Stephane Wrembel's "Midnight in Paris," used in the Woody Allen film). "The openings of 'Song For Gabriel,' and 'Junction' are very idiomatic to the guitar, which makes them feel like pop tunes to me," adds Perri.

Perri and Labro also co-arranged "Rift," by Phish's Trey Anastasio, to close the album, adding a foundation of brisk la pompe rhythm guitar, even a hint of Western swing, to a 1993 rock song of fairly epic (and very electric) proportions, though without abandoning the tune's structure. "I considered it sacrilegious, and refused to shorten the original form of 'Rift' during rehearsals!" Perri laughs.

Labro's pieces make clear his rigorous attention to craft and his wide-ranging influences. "The thing with 'Hey!'" he explains, "is that it was not supposed to be two tenors at first. When we knew Andrew was able to participate, I started thinking I could hear a dialogue and absolutely wanted to include his voice." John Zorn is the inspiration behind "Chutzpah," with a blasting free-form intro that gives way to precise ensemble passages and a riot of changing tempos and feels. The darker and calmer "Goodbye Mr. Shearing" honors the late piano master George Shearing, who in fact started out on accordion. "There are just a few recordings where he plays accordion and his language was great, so ahead of its time for the instrument."

Another Labro composition, "Django Mort," was inspired by a Jean Cocteau poem that was read at Reinhardt's funeral. Aimée sings the French text as the band plays in a laid-back shuffle feel with a romantic flair. "I tried to imagine when those words were first recited, perhaps with an organ playing in the background," Labro says. "So the accordion starts by itself, and the counterpoint is very Baroque. I also thought about Django being a jazz musician, and why not have a procession like they do in New Orleans. So I opened that up into a bluesy vibe, thinking about guitarists like Howlin' Wolf."

Just before "Django Mort" is Labro's arrangement of an unfinished Django Reinhardt mass, "Messe Gitane." While researching Django's death, Labro came upon the only recording of this remarkable work-in-progress, a roughly 10-minute fragment for solo organ. "Django never orchestrated any of it," Labro reports, "but you can tell that something bigger was supposed to arrive." Irabagon and Bishop both play clarinet on the piece, enhancing its chamber-like beauty.

Aimée also offers "a nice bit of vocal athleticism," in Brady's words, on the Angel Cabral tune "La Foule" ("the crowd"), a Parisian standard associated with Edith Piaf. "The lyrics are about two people who meet in a crowd and they dance," Brady offers, "and the party gets more and more crowded and they lose each other." Labro resets the popular waltz in a tricky but natural-sounding mixed meter. "The song is actually Peruvian in origin," he says, "so I wanted to bring that Latin back in. It was already in Cyrille's repertoire, but to sing it that fast with the different meters was a challenge, and she hung in there. She's really willing to take risks."

No less challenging was Ornette Coleman's "Lonely Woman," also arranged by Labro, featuring Irabagon on alto saxophone and Aimée singing a lyric written by Margo Guryan. Labro explains: "In the original, the time and the harmony are there but they're so loose. We needed to find a way to capture what the words are about, without destroying what Ornette intended."

Labro and Brady share composer credit on "Puck Bunny," which is slang for a female hockey fan. "A critic once called us 'puckish'," Brady explains, "so I was originally going to call this 'Puck,' as in the Shakespeare character." Brady also cites the free-spirited influences of Mostly Other People Do the Killing as well as Jason Moran's Bandwagon. Labro scored the piece for bass clarinet (Bishop) and sopranino saxophone (Irabagon), creating the widest possible sonic range. "What's great about having Jon and Andrew together," Labro says, "is that they can play so many woodwinds, so it gives you a lot to work with. You can mix and match and get totally different sounds."

Different sounds coming together, band members collaborating from different cities: all of this makes Junction the perfect album title. "It's a nice mix of pop-oriented material and also rather avant-garde stuff," Brady concludes. "I remember an interview with Marc Ribot, my favorite guitarist in the world, talking about how avant-garde and pop have a lot of crossover, and even some of the musicians are the same people, like Marc himself. It made total sense to me, and it came into my mind while preparing this record." Perri concurs: "We've always believed that if Django Reinhardt were alive today, he wouldn't play the same way he always did. In his short lifespan you can see how much evolution and vision he had. To pay tribute to him is to continue pursuing our own ideas."