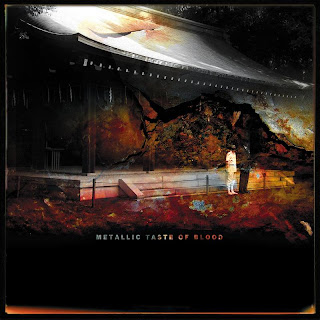 "There's really no specific idea or concept at work here," says Bernocchi, co-founder of RareNoiseRecords who has also collaborated with the likes of Bill Laswell, Mick Harris, Toshinori Kondo, Nils Petter Molvaer and Davide Tiso, and is a member of the experimental doom metal band Obake. "These are four musicians who enjoy working together and playing music where they are freely expressing themselves. I'd say it's more of an emotional stream than a juxtaposition of styles. And it just comes by itself, helped by sound."

Bernocchi, who played guitar in an Italian punk band as a teenager, contributes a wide range of stirring six-string work throughout Metallic Taste of Blood (MTOB), including his spaghetti western guitar on "Sectile," his catchy New Wave-ish riffs on "Bipolar" and his heavy, distortion-laced licks on "Schizopolis" and "Fist Full of Flies." Elsewhere, Bernocchi's ambient music influences play out on his reverb-soaked guitar lines on, "Crystals and Wounds" and "Transverse," as well as his sonic seasonings on the elegant, "Glass Chewer" and the cinematic sounding "Twitch."

Bassist Edwin, a native Australian and member since 1993 of Porcupine Tree, the UK underground band hailed as the Pink Floyd of the '90s, brings an unparalleled, wrecking ball intensity to his crunching fuzz bass lines on tracks like "King Cockroach," "Sectile" and "Maladaptive." Says Edwin, "It's always a journey into the unknown working with somebody new, so on my first visit to Eraldo's studio in Tuscany, I had prepared some basslines and programmed drum ideas to get Eraldo and myself started. Naturally, as a bass player, I am quite drawn to repetitive and hypnotic pattern type basslines, so I had tried to come up with things that were strong enough to build on, but also quite open-ended, and hopefully suggestive of different directions. I had been listening to a lot of Moroccan music, especially Bachir Attar's The Next Dream, and was drawn to the trance-like but evolving quality of the music, so I guess a lot of that seeped through in this project. Eraldo mixed me higher and also encouraged me to add more distortion to the bass than I would have, left to my own devices."

Though Edwin does exhibit thunderous intensity with his throbbing basslines through this MTOB project, his contributions throughout are far more diverse, alluding to slippery dub bass lines on "Glass Chewer" and a kind of tumbao groove underneath "Schizopolis." As he explains, "I have always loved dub, and it's power and discipline, but have never really played in a context where that influence has come through so much before, but it seemed to come out quite naturally here. The basic foundation for 'Glass Chewer' came about as I was thinking of the polyrhythmic approach that occurs in a lot of African music, where you can feel the beat either in cycles of six beats or four. There is a rhythmic tension and release when the guitar figure comes in and goes out, that really appeals to me. 'Schizopolis' was based around a repetitive fretless bassline, but there's a purposely odd symmetry to the repetition, which is then broken by the slow four section that follows. I have always loved Mick Karn's bass playing, and while his work was unique and truly impossible to copy, I would cite the oddness of the bassline here as something that has been influenced by him, likewise the quirky line on 'Crystals and Wounds.'"

While there were structures laid out for the various pieces on Metallic Taste of Blood, Bernocchi says that 50% of the material is improvised. "Improvising is a process that's a part of me," he says. "It's very difficult at this point to detach from it."

Adds Edwin, "We didn't have any kind of blueprint or set out to make something in a particular direction, it was a case of being led by our instincts and by the possibilities we were creating. It became apparent pretty early on to me and Eraldo that we were working on something new for both of us. As for improvisation, certainly that is a part of the sound. There's even a bass solo on 'Schizopolis,' although is has been transformed by Eraldo's sonic sculpting."

While the initial core of MTOB was Bernocchi and Edwin, the addition of drummer Pándi and keyboaridst Saft came easy. "Balázs was a natural choice as I am working with him in Obake and he really fits a band like this. He is such an amazing drummer, he easily adapts to all the styles of this record." says Bernocchi. "Jamie is an amazing musician and shares with us his passion for experimental music as well as extreme metal, which is something you don't really find in jazz musicians too often. Colin and I created some structures, which were really open ones, and then each musician gave a contribution in term of melodies, layering, and arranging."

Adds Edwin, "One of the things I love about working on music is how other musicians can really surprise you because they hear things to do that you'd never imagined yourself, so it has been very inspiring to me to hear the way the material has developed. Early on in the recording process, Eraldo frequently surprised me by doing what he would do with my initial, very basic ideas. Where I had imagined one thing, he would often do the exact opposite. He added some very atmospheric electronics to where I thought he might riff with his downtuned baritone guitar, for example. And Jamie really knocked me out with some of his input, especially his electronics on 'Maladaptive' and his use of the harpsichord on 'Schizopolis' I am aware that some music 'works' precisely because of the juxtaposition of seemingly incongruous elements, but no one in the band suggested we do anything a certain way; it's more the case that the blend of personalities in Metallic Taste of Blood is what has lead us to the results on the album. So you could say, the personalities have led the concept."

Regarding his two current, similarly intense working bands, Metallic Taste of Blood and Obake, Bernocchi says, "The approach is very similar. There's an improvisation component in both of them. MTOB is much more structured and we conceived the record as a modern kind of opera that was really organic. Obake is much more direct, a punch-in-your-face kind of thing. It'll stay like that and possibly become more and more heavy over the course of a song."

And regarding the potent band name, Edwin says, "It was Balázs' suggestion to use the name Metallic Taste of Blood, which we all liked immediately. I think it fits the music perfectly; it's unsettling, but strangely satisfying at the same time."