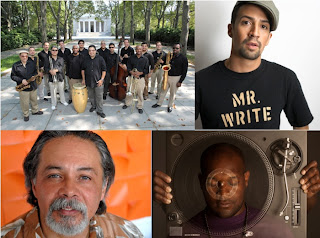 ** Rehearsals will be open to members of the media, with the opportunity to shoot B'roll. **

Founded in 2002 by O'Farrill to perform the full repertory of big band Afro Latin jazz and commission new works to advance this culturally rich genre, the ALJO was a resident orchestra at Jazz at Lincoln Center from 2002 to 2007. In 2007, the ALJO left Lincoln Center to pursue the twin goals of developing new audiences for big band Afro Latin jazz and of creating a robust educational program for young performers. O'Farrill founded the Afro Latin Jazz Alliance that same year to pursue both the performance and educational aspects of this uniquely pan-American art form.

The ALJO is currently in its fifth season in residence at Symphony Space, and it continues to tour nationally and internationally to critical acclaim, performing over the past several years at The Kennedy Center for the Performing Arts, Boston Symphony Hall, the Newport Jazz Festival, The Joyce Theater (with Ballet Hispanico), Megaron Concert Hall (Athens, Greece), and the Taichung Jazz Festival (Taichung, Taiwan), among countless other venues. The ALJO received a GRAMMY® nomination for its 2005 album, Una Noche Inolvidable (Palmetto), and in 2009 earned a GRAMMY® for Best Latin Jazz Album for its release Song for Chico (Zoho). The Orchestra's newest album, 40 Acres and a Burro (Zoho), was a 2012 GRAMMY® nominee for Best Large Jazz Ensemble Album.