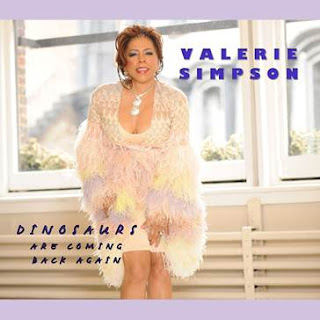 Valerie Simpson, one half of the beloved and legendary songwriter/producers and performers Ashford & Simpson, has returned to the music scene with her new album Dinosaurs Are Coming Back Again scheduled for a late May release. “Dinosaurs” is Simpson’s first solo album in over four decades and follows the death last year of her husband and longtime musical partner, Nick Ashford. “My honey put his heart and soul and some powerful lyrics into this album for me. I think Nick would be very pleased and proud of how it came out,” commented Simpson. “Dinosaurs”, produced by Ashford & Simpson, includes guest appearances by Roberta Flack and Nina Simone. "Make It Up As We Go" is the last recorded vocal of the late great Nina Simone. She consented to do this haunting duet with Simpson in the South of France and it was an experience she says that she willl never forget. It also includes the Ashford & Simpson classic, “Ain’t No Mountain High Enough” in instrumental form.

Simpson is scheduled to perform at the Merriweather Post Pavilion in Columbia, Maryland on June 2nd. Valerie is also continuing her commitment to nurture and help talent at New York’s Sugar Bar where she sings along with emerging and well-known artists most Thursdays for ‘open mic’ night as well as “Nothin’ But The Blues” nights on Tuesday evenings. Nick and Val opened the Sugar Bar as a famed restaurant and bar on the Upper West Side over ten years ago.

Valerie Simpson and Nick Ashford have written some of the biggest hits of their generation including “Let’s Go Get Stoned”, “Your Precious Love”, “Ain’t Nothing Like The Real Thing”, “You’re All I Need To Get By”, “Reach Out and Touch”, “The Boss”, “I’m Every Woman” and scores of other tunes. They have written and produced for a who’s who of music legends including Diana Ross, Whitney Houston, Chaka Khan, Marvin Gaye and many others. As one of the most famous duos in music, Ashford & Simpson released several of their own albums for Warner Bros. Records and Capital Records where their huge hit “Solid” became their personal anthem.

An Ashford & Simpson’s performance in 2007 at NY’s Feinstein’s at the Regency was filmed and aired on PBS stations across the country and released on DVD simultaneously with the release of “Hits, Remixes and Rarities” – a two-disc set of choice material from their Warner Bros. years.

Ashford & Simpson tunes have remained a constant on the charts. Singer Ryan Shaw was nominated for a 2008 Grammy for his cover of the Motown era A&S penned “I am Your Man”. Method Man and Mary J. Blige’s Grammy-winning medley of “I’ll Be There For You/You’re All I Need To Get By” (1995), 50 Cent sampled “Silly Wasn’t I” on his hit “Best Friend” (2006) and Amy Winehouse’s “Tears Dry On Their Own”, was built on the music from “Ain’t No Mountain High Enough”.

Last year, Valerie attended the 2011 Soul Train Awards in Atlanta where she inaugurated a songwriting award in Nick’s name. She also performed with Usher at The Grammy Nominations Concert Live! in a special tribute to the music of Ashford & Simpson.

She did her first real gig last December in Indiana, after attending the annual ASCAP Foundation Awards ceremony at Jazz at Lincoln Center and establishing the "Reach Out And Touch" Award in Nick’s honor, to provide promising songwriters with financial assistance for professional recordings of their original songs.

With the release of the highly anticipated “Dinosaurs Are Coming Back Again”, Valerie Simpson is still creating great music as she enters the next chapter of an extraordinary career.
Posted by Jazz Chill at 10:09 AM