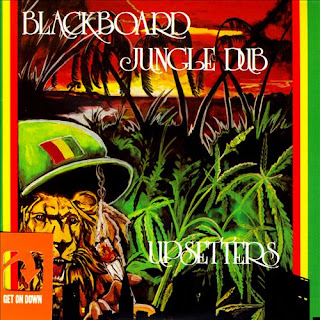 On Blackboard Jungle Dub, Lee Perry and the Upsetters produce another fine example of their subversive brand of dub with a unique blend of murky rhythm tracks, warbling guitar effects and distant-sounding horns. Although it does not quite match the quality of the classic Upsetters album Super Ape, Blackboard nevertheless impresses with both the brevity of "strictly" drum and bass cuts such as "Dreamland Dub" and "Kasha Macka Dub," and expansive touches like the animated DJ toasting on "Cloak A Dagger (Ver. 3)." Living up to the "Upsetter" moniker, Perry wreaks his inimitable brand of mayhem during "Fever Grass Dub" with a half-baked MC intro, lion roars and air raid siren imitations; effects which blend in well with other eccentric features like the spastic trombone solo on "BlackBoard ver. 2" and reverb-heavy percussion on "Cloak a Dagger." Just standard technique for Perry really, and part of the sound which made his productions instantly recognizable amongst many '70s and '80s dub releases. Blackboard Jungle contains classic dub taken to the outer limits and is one of the highlights of the Lee Perry catalog.