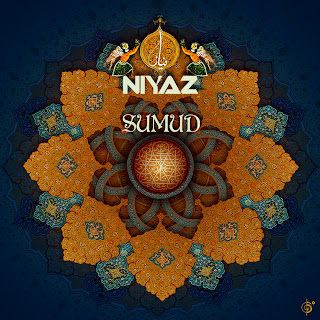 Niyaz, which means ‘yearning’ in Persian and Urdu, was formed in 2005 by vocalist Azam Ali, multi-instrumentalist Loga Ramin Torkian and two-time Grammy nominated producer and electronic musician Carmen Rizzo. Since their last release, Nine Heavens made waves in the global music community, the band have toured worldwide, had their music placed in numerous films & television shows and each released stunning solo albums that continue to push them into the international spotlight. Nine Heavens was heavily featured on world-wide radio (including NPR and PRI in the States), topped the charts of iTunes World Music and CMJ World Music, and continues to be discovered by new fans worldwide.

Now the band returns with their third album, Sumud. The album's title is Arabic for "steadfastness" and the record's musical themes center around the plight of ethnic and religious minorities around the world. Azam Ali chose this philosophical term as a symbolic reminder that, as she explains, ‘every human being should inherit the right to live with dignity and freedom upon the land on which they are born.’

With a heavier emphasis on the electronic side of their sound and a special guest vocal appearance from Oscar-winning Indian composer, musician and singer AR Rahman, Sumud is the most powerful release yet from one of global fusion's most popular bands.