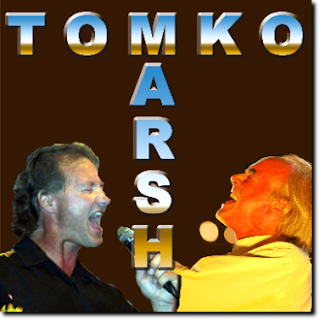 Larry Tomko and Peter Marsh have come together on TomkoMarsh, a new 11 song disc of mainstream adult rock and funky soul mixed with contemporary jazz. Both musicians sing and harmonize on all the tracks, with Tomko taking the sax and keyboard duties and Marsh on guitars.

With the single "Slow Dancer," an old-school R&B tune with a sweet hook, danceable rhythm, and overall sound that could top the play list of any adult contemporary radio station.

"My Secret Love" takes off in the same direction, reminding listeners of singer Chris Rea, soulful and smooth.

"Stand Back" mixes straight forward rock with Steely Dan-like harmonies. Both musicians sing and harmonize on all the tracks, with Tomko taking the sax and keyboard duties and Marsh on guitars.

Peter Marsh's music career extends back to the mid 1970s when he released albums under various band names for record companies like CBS/Epic and Polydor. His knack for songwriting led to writing music for big names of the time like Nick Lowe and soul legend Jimmy Ruffin, and session work with artists like Manfred Mann. Later he moved to London then France and built studios for recording his own music and others. He toured France with great success.

Larry Tomko came to France via San Francisco as a sax player, songwriter and backup singer. After contributing to acclaimed studio projects he formed his own band and toured as opening act for Ella Armstrong. He recorded two top-ten singles, “Keep on Groovin'” and “Everybody Celebrate,” and went on to form his own acts for studio projects and live performances around Europe and America.

The magic of their collaboration started brewing when Peter and Larry met at a “Marsh and Co.” concert in France. Afterward, Peter called Larry to ask if he would drop by his home studio and blow sax for a commercial project. Right away they knew they had a magical touch for making music together.

Says Peter, "I had no idea what we were going to do or if Larry would even like the idea. We gave it a go and finished ten tracks in one day!"

About that special day, Larry adds, "I wasn't too sure about the whole idea. The tracks were very smooth jazz/funk oriented, with no vocals and some with no melodies. Peter just hit the record button and I blew sax for a few hours. We got along great in the studio."

Realizing they had a common base of reference and love of all things funk, they decided to collaborate for Funk My Dog, a smooth jazz CD praised by SmoothJazz.com.

Next they flew off in another direction and focused their energy on making a rock/pop album. The result is Tomko Marsh, an album that lets their musicianship and vocals shine.

This is a can’t miss album for music lovers.