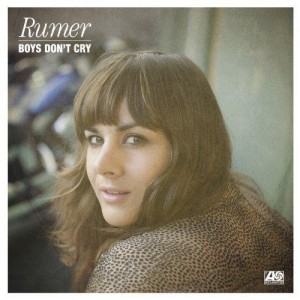 Atlantic recording artist Rumer has announced the U.S. release of her extraordinary new album, Boys Don't Cry. The collection -- which follows recent domestic release of the British singer/songwriter's acclaimed debut, Seasons Of My Soul -- arrives on these shores on September 25th.

The album has already begun drawing critical applause, with Mojo hailing it for "(showing) off Rumer's ability to inhabit, interpret and seek out the universal... Rumer's still-remarkable Karen Carpenter voice (is) the gentle hand on forehead, pure white linen, a kind of musical Florence Nightingale, quick to round up the strays, seal up the wounds and make everything lovely."

Rumer heralded next week's British release of Boys Don't Cry with a stellar rendition of the album's first single, Jimmy Webb's "P.F. Sloan," on the BBC's flagship music program, Later with Jools Holland. The singular performance -- which saw Rumer accompanied by the one and only Webb -- can be viewed now at Rumer's official website, www.rumer.co.uk/updates,watch-rumer-performing-with-jimmy-webb_129.htm?f=news. Additionally, Rumer will celebrate the release of Boys Don't Cry with a live show at London's St. James's Church which will be broadcast live via different online partners around the globe.

Fueled by the much-admired hit singles "Slow" and "Aretha," Seasons Of My Soul was a platinum certified popular success upon its initial 2010 U.K. release. What's more, the album proved an international sensation, reaching the top 10 in Belgium, Norway, Ireland, New Zealand, and the Netherlands.

Seasons Of My Soul was also a critical phenomenon, earning unprecedented acclaim for a debut album. Mojo hailed the collection as a five-star "Instant Classic," praising Rumer for "(achieving) perfect balance between effusion and restraint... It's as if Rumer is laying bare humanity's soul, such is her ability to create intimacy and emotional depth within a song." "A mellifluous aural balm of jazz and soul, these are songs of yearning and loss," declared Q in a four-starred rave, while Uncut applauded the album for its "dream-like melancholy, thanks to the tension between Rumer's sweet voice and her troubled lyrics." "Sensationally good," affirmed The Sunday Times, "Rumer has one of those voices -- a sort of confiding, conversational sigh, equal parts Laura Nyro, Karen Carpenter, Dusty Springfield, and Joni Mitchell -- you would be happy to listen to for days and days."

Furthermore, Rumer received rapturous praise for her live performances, with Q extolling "a voice pure as a primary colour, dappling occasional light towards Carole King, more seldom Alison Goldfrapp, but for the most part a fiery phoenix rising from the unmistakable ashes of Karen Carpenter." "Her vocals are a deft blend of bright, shining delicacy and the darkness of genuine heartache," declared The Independent of a headline appearance at London's famed Bloomsbury Theatre, with The Times proclaiming the show as "a classic pop moment." In addition, a performance at New York's Joe's Pub earned the admiration of the Daily News, who noted, "It's particularly gratifying in these melisma-mad days to hear a singer who doesn't throw her voice around athletically. Instead (Rumer) trusts the essential quality of her instrument to tell the tale."

The U.S. release of Seasons Of My Soul was followed by a number of high-profile TV appearances, including NBC's The Tonight Show with Jay Leno, E! News, and CBS Sunday Morning. The latter feature instantly established Rumer as a major star, catapulting the album to #1 on the iTunes Store as well as both Amazon and Barnes & Noble's digital albums charts.