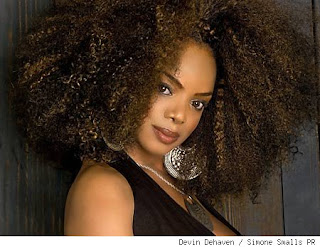 Since her childhood in L.A.'s eclectic urban culture, singer Leela James has woven the soul tradition into and around every corner of her creative identity. Deep within her rich and powerful voice are the echoes of Aretha Franklin, Mavis Staples, Gladys Knight and other iconic divas of generations past.

Born and raised in Los Angeles, James was surrounded by music from a very early age – much of it from the soul, R&B and gospel traditions that predated her by at least a couple decades. “There was definitely a lot of Al Green played in our house," she recalls. "And there were other gospel singers too, like James Cleveland, The Mighty Clouds of Joy and Shirley Caesar." She recalls her neighborhood as an extension of her own home and family. As such, she absorbed the eclectic array of whatever was playing in her friend's homes and on the streets. There was the soul and R&B and funk from artists like Aretha, Smoky Robinson and Parliament," she says. “And there was B.B. King and all the other blues artists, and then the hip hop by Run DMC and LL Cool J. There was so much that I was exposed to."

Along the way, it never occurred to her that much of what she was hearing was at least a generation ahead of her time. "Good music is timeless," she says, "so you don't really stop to think that certain music is from a different period and you're too young to embrace it. If it's good, it's good." By the time she was in high school, she was singing in numerous talent showcases and competitions. "I knew it was something that I wanted to pursue," she says, "because I enjoyed the music and I enjoyed being on stage and making people feel good and getting a positive reaction from singing."

She made her recording debut with A Change Is Gonna Come, released on the Warner label in 2005. The album title alone – taken from the title of a 1964 posthumous hit by Sam Cooke and an anthem for the civil rights movement – speaks to James' deep-rooted belief in the soul tradition and its ever-present potential to influence history. In the midst of a change in management and label over the next four years, James kept busy with an aggressive tour schedule that introduced her to festival audiences in the Netherlands, Switzerland, South Africa and elsewhere around the world. Along the way, she was nominated for 2006's Outstanding New Artist by the NAACP Image Awards and Best R&B/Soul or Rap New Artist of 2008 by the Soul Train Music Awards.

In 2009, she recorded Let's Do It Again for the Shanachie label. The album was a series of covers – mostly soul, R&B and funk tunes by the likes of Bootsy Collins, The Staples Singers, Al Green, James Brown and Bobby Womack. Also in the mix were songs originally recorded by lesser known artists like Betty Wright and Phyllis Hyman. Let's Do It Again prompted readers of soultracks.com – the respected website for all things soul, R&B and gospel – to tap James as Female Vocalist of the Year in the site's 2009 Readers Choice Poll in December 2009. But the time for James’ tributes to the old masters – however legendary – is past. My Soul (2010) consists primarily of material written or co-written by James and crafted by an assortment of talented producers, including Gerrard Baker, Carl "Chucky" Thompson, Kadis & Sean and others. The album is a giant step forward in James’ ongoing process of defining who she is and what the soul tradition has meant to her.

Clearly, Leela James's musical soul embraces an infinite range of emotions and human struggles. As an artist and as a person, making tough choices and doing the right thing – even if it's the hard thing – is what she's been all about for more than a decade. In the process, she has never lost sight of the core values of the soul tradition – passion, perseverance and a strong sense of identity. All of these and more are at the foundation of My Soul.

"In the past, people tried to put me in a box, based on what they thought soul should sound like," she says. "But soul is whatever comes out of you when you bring your deepest and most honest emotions to the forefront. All these songs are a representation of my soul."

Set for release in the coming months from Shanachie Entertainment is the highly anticipated tribute album entitled, In the Spirit of Etta James.
~ leelajames.com
Posted by Jazz Chill at 1:37 PM