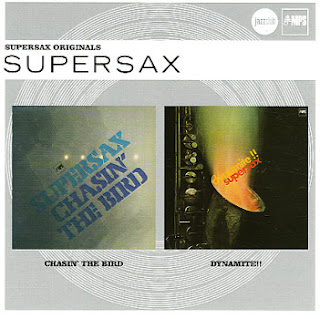 Two MPS gems from this unusual 70s ensemble – back to back on the same CD! Chasin' The Bird features classic bop modes, updated strongly for the 70s – and played by a hip group of older players who really know how to cook! Supersax is led by Med Flory on alto, who also did the arrangements – and works here with great reed help from Warne Marsh and Jay Migliori on tenor, Joe Lopes on alto, and Jack Nimitz on baritone – plus soaring sounds from Conte Candoli and Blue Mitchell on trumpets, Frank Rosolino on trombone, and Lou Levy on piano – all of whom really help the reed players find their groove! Charts are large, as is the ensemble, but there's a nice sense of individual personalities too – even when all the saxophonists are taking a solo together at once. Titles include "Shaw Nuff", "Drifting On A Reed", "Oop Bop Sh'Bam", "Now's The Time", and "The Song Is You".

Dynamite is a looser, more free-swinging album than usual for Supersax – one that still has the group working with some key contributions from west coast jazz luminaries, but in a vibe that's almost more small combo than larger ensemble! The tracks here include a fair bit of Bud Powell and Charlie Parker numbers, but the arrangements are mighty fresh – open, and swinging with some hipper 70s touches, thanks to rhythms from a trio that features Lou Levy on piano, Fred Atwood on bass, and John Dentz on drums – players that are never locked into a strict bop mode. As with other Supersax albums, there's a brace of reed players working together at the front – Lanny Morgan on alto, Jack Nimitz on baritone, and both Jay Migliori and Don Menza on tenors – coming together as one voice on the solos, and getting some key help from Conte Candoli on trumpet and Frank Rosolino on trombone. Titles include "The Fruit", "Bambu", "Blues For Alice", "Tempus Fugit", "Parker's Mood", and a surprising, but great take on Antonio Carlos Jobim's "Wave". ~ Dusty Groove