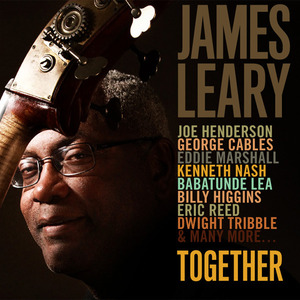 In the world of bassists/composers associated with the music commonly known as jazz, and sometimes referred to as America’s classical music or National Treasure, names like Oscar Pettiford and Charles Mingus stand out amongst an elite group. However, this elite group has expanded over the years along with the natural role of bass in contemporary music ensembles. Today we have many great bass players who are also great composers and James Leary is certainly one among them!


As a bassist, James Leary has worked consistently for over fifty years performing with many of the world’s most renowned entertainers and performing artists. He has accumulated a long list of credits, overshadowing an equally impressive list of personal artistic accomplishments (For more bio information, please visit http://www.jamlearmusic.com/).

Together is a CD project featuring a compilation of original compositions written and arranged by James Leary. The music is an integral part of his musical legacy and chronicles many of his west coast artistic endeavors, emanating from a deep sense of social responsibility and dedication to community involvement. The first seven tracks showcase a unique big band sound, recorded and independently released on vinyl in 1980. Although the music was well received by those hearing the band live as well as on recordings, the record album was not promoted and got very little national or international exposure. Today, the music is heralded as a classic San Francisco Bay Area treasure, witnessed and heard by only a few. With George Cables, Eddie Marshall, Kenneth Nash and Babatunde Lea joining him in the rhythm section, James paints a musical landscape for the incomparable solo genius of the great tenor saxophonist, Joe Henderson, backed by some of the finest section players in the Bay Area at that time! We are sure both casual listeners and serious music enthusiasts will agree that it would be a “Cardinal Sin” not to re-release these tracks with a goal of reaching broader audiences and increasing opportunities for the greater public to experience and collect this music.

The remaining six tracks were taken from various sessions produced in Southern California, during the 1990’s. With the exception of the tune “Little Joe,” James composes for smaller ensembles on these tracks, featuring “jazz” heroes based in and around the Los Angeles area, including our co-founder and inspiration for LifeForcejazz Records, the legendary Billy Higgins. Whether writing for instrumentals, vocals, small or large ensembles, James Leary is a music storyteller with a dedicated connection to other performing arts disciplines. Listeners of this CD will hear his propensity for creating and harmonizing haunting melodic themes over an array of different rhythms and tempos, which is also his formula for scoring sound tracks used in films, modern dance or theatrical productions. Although the innovative music presented on this disc reflects James Leary’s interpretation, expression and statement of personal experiences, it also positively impacts the consciousness of society by continuing to convey messages of peace, love, unity and the idea that “we can make a deal,” Together!

~ lifeforcejazz.com
Posted by Jazz Chill at 11:10 AM