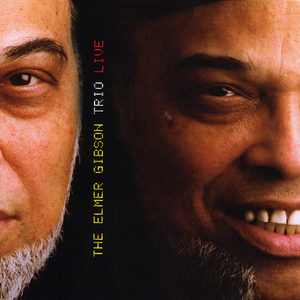 "Elmer Gibson is probably a new name for most of us, but he has been performing his brand of mainstream Jazz for many years, perhaps most notably with the Norman Connors Band in the 1970s. Gibson is an excellent pianist and a good composer and arranger, with good taste in sidemen." It is ironic that Steven Loewy wrote this review for Generation Dance in Cadence Magazine, April, 2003, because it is especially applicable in this offering, which he has not heard.

The Elmer Gibson Trio Live date features an unknown bassist, Rick Jones, a doctorate of electronic engineering, who cut his eyeteeth playing with Elmer over the previous ten years, and a rediscovered powerhouse drummer named Ron Free, who hadn't been heard from in 30 years, since his days with Mose Allison. Ron sat in on Elmer's gig at the Chef and Clef in Charleston, SC, the year before and this was Elmer's first opportunity to call him for a gig. Ironically, Ron's first official recording date (at the tender age of 20) was given to him by a cousin of Elmer's, the eminent bassist Oscar Pettiford. Oscar had heard him perform in the pit band for an off-Broadway show called "The Shoestring," and was obviously impressed.


What is truly amazing is the fact that this session would not exist if it had not been for Rick's foresight and engineering skills that made him bring his DAT recorder that inauspicious November night in 1994. Rick had received his first taste of big-time drummers when Elmer headlined a trio date for the Artsplosure Festival (Raleigh, North Carolina) featuring Danny Richmond, and another with Bobby Durham, sadly, neither of which was recorded. Rick had this to say about his experience with Ron: "Elmer and I had played together enough that I knew his music pretty well. Ron, of course, was not familiar with any of Elmer's music.

Given those circumstances, what you hear from Ron in the performances recorded at that gig, is remarkable. Even the first time through a given tune, you can hear how Ron is able to anticipate the rhythmic aspects of the tune and make it sound like we had been playing together for years. His musical radar created a cohesiveness that inspired us collectively and lifted the music to new heights.""What Happened to Ronnie Free?" shouts a headline from an article by Sam Stephenson in the Oxford-American (July/August 2000).

Well, this CD answers the question. And what does Ron think about his re-emergence? "I am proud of our performance. We did some serious cooking, rare and well done at the same time. We had a lot of good energy going." And what does Elmer Gibson think about this recording? "If Rick hadn't saved those DATs, and if I hadn't decided to revisit them in 2001, I would have missed presenting what is probably my best performance on record to date. Totally unselfconscious and full of genuine emotion and a lot of fun." How ironic.