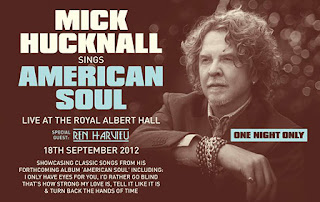 Mick Hucknall has announced his first solo concert, to be performed at the Royal Albert Hall in London for one night only, on September 18th 2012. This hails the beginning of a new chapter for ex-Simply Red frontman Hucknall after the final curtain fell on Simply Red at their triumphant sell-out Farewell Tour in December 2010. On what promises to be a very special night in Hucknall’s glittering career, he will showcase his forthcoming new solo album American Soul, featuring his own take on classic songs which have inspired him throughout his life. American Soul features such songs as “I Only Have Eyes For You”, “I’d Rather Go Blind”, “That’s How Strong My Love Is”, ‘Tell It Like It Is”, and “Turn Back The Hands Of Time”. The Royal Albert Hall is without doubt the most prestigious and beautiful live venue in London and has been the host to the most revered artists of our time, drawn from every musical genre; a fitting venue for the launch of the exciting next phase in Mick Hucknall’s extraordinary career.