DORIS DAY - WITH A SMILE AND A SONG 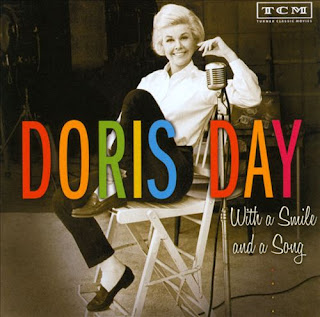 In conjunction with Turner Classic Movies (TCM), With a Smile and a Song presents 30 examples of Doris Day during her popular peak, which is the dozen-year period from the early '50s to the mid-'60s, when she was lighting up the silver screen as well as the charts. Compared to earlier double-length collections (including the one to beat, Golden Girl: Columbia Recordings 1944-1966, this one focuses less on her big-band beginnings and commercial hits, with more time spent on songs from the great American composers and the songs she sang in movies. (Day helped out with the compilation of With a Smile and a Song, which can explain many of the differences.) Of course, there's a spot for her best-loved hit, "Whatever Will Be, Will Be (Que Sera, Sera)," as well as "Pillow Talk" and "Secret Love" and "By the Light of the Silv'ry Moon." Unlike previous sets, though, this one values her work on the great vocal standards: "You Go to My Head," "My Romance," "Fools Rush In," "But Beautiful," "Our Love Is Here to Stay," "Love Me or Leave Me," and "It Had to Be You." Although it's always valuable to hear how well Doris Day sang during the '40s, with Les Brown and others, this collection offers as much as any other to show how Day became one of the best and best-loved vocalists of the 20th century.
~ John Bush

Michael DeVita is the author of a brand new book about Doris Day that chronicles her life, especially her music, from the beginning to the very end. "My 'Secret Love' Affair With Doris Day", now available at www.amazon.com. Check the reviews and get your copy now! See how Doris, her music and her career affected the author all of his life.
More Information: http://www.youtube.com/watch?v=58K_TAr8nxg