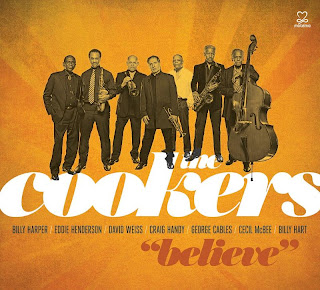 In an interview, drum great Billy Hart summed up his attitude toward The Cookers succinctly but emphatically: "Believe in us," he insisted (tacking an expletive onto the end that served to press the point home). Over the course of two albums, The Cookers have given jazz audiences plenty of reason to believe, and their Motéma Music debut, bearing the simple but eloquent title Believe, finds the all-star septet continuing to keep the faith in swinging fashion - their third release, celebrating their fifth anniversary as a working ensemble.


The credentials of these seven musicians are beyond reproach, but simply gathering a group of legends and throwing them into a recording studio isn't necessarily a recipe for success, points out David Weiss, the band's founder, chief organizer, and trumpeter. "A lot of basketball teams throughout the years have signed a group of all-stars and assumed they would win it all because they had assembled the best group of players imaginable and in the end lost because they never really considered that the group would not gel and could not play together," Weiss points out by way of illustration. "You can't just put a bunch of names together and expect it to be great. These guys just turned out to be the perfect combination."

It's impossible to foresee how any ensemble will gel until the first notes are played, of course, but The Cookers had an inherent advantage in the fact that these legendary jazzmen had all proven themselves integral components in great bands of the past. Harper was a member of groups led by Lee Morgan and Max Roach and served a two-year stint with Art Blakey's Jazz Messengers; trumpeter Eddie Henderson and drummer Billy Hart were both part of Herbie Hancock's electric Mwandishi ensemble; pianist George Cables played alongside Dexter Gordon and Art Pepper; and bassist Cecil McBee anchored Charles Lloyd's famed 1960s quartet with Keith Jarrett and Jack DeJohnette.

"This is a band," Weiss says, emphasizing the fact that the unit has cohered into something that transcends its all-star status. "But it's a band of guys who have been in a lot of the most important bands in the history of this music. They know what it's like to be in a band and what makes bands great."

The line-up is completed by Weiss and altoist Craig Handy, players from a later generation who nevertheless follow in their bandmates' fiery footsteps. The name comes from the Freddie Hubbard's classic two-volume album Night of the Cookers, classics featuring Lee Morgan, Harold Mabern, James Spaulding, Pete LaRoca, Big Black, and Larry Ridley. These Cookers approach their material in the same sense of adventurous exploration as Hubbard and his ensemble did, generating brilliant music out of seemingly basic elements.

Like their previous two critically acclaimed releases, Cast The First Stone (Plus Loin, 2011) and Warriors (Jazz Legacy Productions, 2010), Believe consists almost entirely of music written by the band members themselves, culled by Weiss from throughout their storied careers. For those earlier albums, however, Weiss pulled primarily from his own fondly-remembered favorites. Having exhausted his personal wishlist, this time out he had to dig a little deeper, providing the enviable opportunity to unearth some undersung treasures from his colleagues' back catalogues.

The disc opens with the jagged-edged "Believe, For It Is True," from Harper's 1980 album The Believer, which is followed by the mysterious unfolding of McBee's previously-unrecorded "Temptation(s)." McBee also contributes the free-form "Tight Squeeze," from his 1996 Palmetto release Unspoken. Cables' simmering "Ebony Moonbeams" was originally recorded on Freddie Hubbard's 1974 session High Energy, while Hart's buoyant "Naaj" was premiered on the drummer's 1988 album Rah.

What Weiss discovered during the process was that not only did these men's playing mesh together fluidly, so did their compositional styles. "They all complement each other perfectly," he says. "It makes for a more interesting program. Billy Harper's tunes are amazing, but if he's coming on like a sledgehammer, a George Cables tune balances things. If there's too much beauty - if there is such a thing - in George's tune, we have Cecil McBee's tunes for something a little more ethereal or experimental. They all come essentially from the same era, so they all speak a common language."

A prime example is the way that the brash fanfares of Harper's "Quest" are tempered by Cables' tender, strolling "But He Knows," before McBee's fragmented "Tight Squeeze" raises the blood pressure again, an effect counteracted by the joyous, palette-cleansing "Naaj."

The final selection finds The Cookers truly living up to their name on a blistering run-through of Wayne Shorter's "Free For All." The piece is the title tune from Art Blakey's 1964 hard-bop blow-out that also yielded "The Core," the ferocious Freddie Hubbard tune that was a highlight of The Cookers' 2010 debut. Blakey's Free For All was a landmark album for these master instrumentalists, Weiss explains.

"It was like me hearing my first Mahavishnu Orchestra record when I was 12 years old. It was one of those records that spoke to you as a kid and got you in touch with your love for the music. For them, it was Free For All."

And for countless aspiring jazz musicians who came after them, that landmark listening moment came via a classic album that, chances are, featured at least one of these players. The Cookers' line-up serves as a lifeline to one of the music's golden eras, a rare conglomeration of true living legends still making vital, modern music.

"Once you get these guys together and really see what they can do," Weiss says, "you see that they're not truly being recognized. They have direct ties to all the music that everybody, even younger people, came to this music listening to. They were part of what made jazz what it is and the classic records that attract most people to jazz, the greatest era of this music. Let's not forget where this thing came from and why it was so good: it's exciting music played with compassion and conviction and intensity. That's what these guys are doing."

It's that urge, to recognize and celebrate these tremendous artists while they continue to create at the height of their powers, that inspired the band to distill Hart's directive down to that one single word: Believe.

"It's a simple word for a philosophy," Weiss says. "Just believe in something. Care about something. And since you have this record in your hand, believe in this."