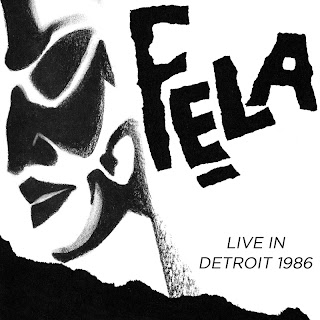 New York's Knitting Factory Records presents the release of Live In Detroit 1986, the first new Fela Kuti material to be issued since his final studio album, Underground System, in 1992. Recorded live at the Fox Theater in Detroit in November 1986, the concert marked a triumphant return to the USA for Fela. He had tried to leave Nigeria to tour the States two years earlier before being arrested and imprisoned on dubious charges of "currency trafficking". An Amnesty International campaign helped secure his release in April 1986 and, just two months later, he appeared on stage as part of Amnesty's Conspiracy Of Hope American tour.

The evening's audio recorder, Bob Teagan, recalls the '86 Fox Theater show, "It was like seeing Boby Marley, Frank Sinatra, Michael Jackson, Marvin Gaye, and James Brown all rolled into one. Fela captured the revolution of Marley, the love of Marvin Gaye, he sung with a rare and exquisite charcoal voice like Sinatra but he would scream himself out and go hoarse by the end of the three hour marathon show, all the while he danced like Michael Jackson or a ballerina, and captivated the crowd with the showmanship of James Brown...Coming into the Fox Theater, Fela was well aware that it was the same venue that birthed the careers of Marvin Gaye, Stevie Wonder, and it was the epicenter of Motown. These were all profound influences on Fela and he did those artists justice with his performance, dancing all across the massive stage and inciting the crowd to move with him."

The Detroit concert was part of Fela's debut US tour with his Egypt 80 band and the recording finds them on strident form, showcasing all-new material in free-flowing extended workouts: "Just Like That" recalls Fela's memories of the Nigerian Civil War; "Confusion Break Bones" (an update of his earlier track, "Confusion"), compares the present African situation to a permanent traffic jam at a town center crossroads; "Teacher Don't Teach Me Nonsense" swipes at the oyinbos (white men) forcing sham versions of democracy on Africa and allowing "democratic" rulers to line their own pockets at the expense of the people while foreign-owned multi-nationals are allowed to freely strip the continent of its natural resources; "Beasts Of No Nation" reflects on Fela's recent court case and imprisonment in Nigeria and, more widely, on the issues around Apartheid. The messages here resonate as powerfully as anything from Fela's career.

The tracks featured in the concert would appear on studio albums: Teacher Don't Teach Me Nonsense during the same year, produced with Compass Point studios mainstay Wally Badarou, then Beasts Of No Nation and O.D.O.O. (Overtake Don Overtake Overtake) in 1989. Often overlooked in favour of the punchier sound of Fela's recordings with Africa 70, these later recordings are deeply soulful affairs, at times melancholy, marked by lengthy, complex and freeform arrangements.
Live In Detroit, 1986 is released on May 8th by Knitting Factory Records.

~ glidemagazine.com
Posted by Jazz Chill at 8:49 AM