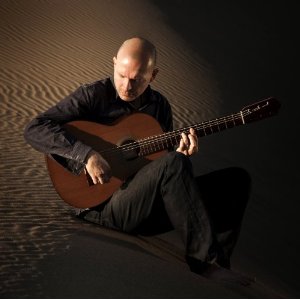 Much like the changing weather, flamenco guitarist Ottmar Liebert embodies a shift in seasons with the new sounds heard on his recently released album titled Dune. Liebert and his band Luna Negra are bringing their famous contemporary southwest flamenco sounds on the road during their North American Summer 2012 tour.

The album's 15-tracks, bookended by brief mood locators that weave in and out of the mysterious world of night and shadow, are packed with texture, combining traditional acoustic guitar with modern electric instruments. Throughout the album, Liebert switches between scales, beats and melodies from across the globe, blending heart-pumping percussion with accordions, Memphis bass lines and trumpets.

"I wanted to play guitar melodies that sounded sung," said Liebert. "For some reason I kept thinking about old jazz and pop crooners, so I sang almost every melody first and then figured out how to play it on guitar."

The album, sometimes described as Flamenco noir, is a mysterious nocturnal narrative about a horse, the desert, the moon, swirling sand and spiraling smoke that leads to a place of power, the Dune. Rogers believes Dune is a testament to Liebert's brilliant and mysterious artistic nature, and is destined to join the five-time Grammy nominee's collection of Gold and Platinum Records.

http://www.ottmarliebert.com/
Posted by Jazz Chill at 10:39 AM