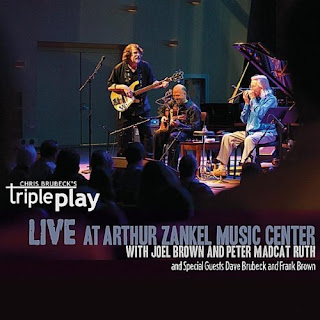 Over the past decade, Chris Brubeck (on bass, trombone, and piano), guitarist Joel Brown, and multi-instrumentalist Peter Madcat Ruth have honed a vast and vivid repertoire encompassing Delta blues, Tin Pan Alley standards, New Orleans grooves, jazz gems, and incisive originals. With all three contributing vocals, Triple Play delivers an epic sojourn through American music unlike any other band on the scene.

Triple Play grew out of Crofut & Brubeck, an ensemble formed with the innovative banjo player Bill Crofut and Joel Brown on guitar. They produced a series of critically acclaimed CDs for Albany (Unsquare Dance); Telarc (Across Your Dreams, featuring Frederica von Stade); and Koch (Bach to Brubeck, a collaboration with the London Symphony Orchestra that included Chris's symphonic arrangements and compositions).

Following Crofut's 1999 death, Madcat Ruth (whose relationship with Brubeck dates back to their teenage years in the late 1960s) joined Brubeck and Brown to form Triple Play. The group's first Blue Forest CD, 2000's Triple Play Live, documents their roof-raising energy while the second, Watching the World, captures the trio's freewheeling humor, dazzling musicianship, and unpretentious spirit. After seeing the group at the Monterey Jazz Festival, Seattle Times critic Paul de Barros noted, "Triple Play is what jazz always was and always should be about: good-time rhythm, unbridled joy and the sweet release but bittersweet aftertaste of the blues."

As a player, Brubeck divides his time between fretless electric bass, piano, and bass trombone. His desire to increase the horn's visibility led to his first major orchestral composition, "Concerto for Bass Trombone and Orchestra," which he recorded at Abbey Road Studios with the LSO for Bach to Brubeck. The piece has been performed by many orchestras throughout the world including the Pittsburgh Symphony, the Baltimore Symphony, and a televised performance by the Boston Pops. (Chris will appear as soloist when the Orchestre de Bretagne in Brittany, France, performs the Concerto in October 2012.)

The concerto's success led to a steady stream of classical commissions, such as "Interplay for 3 Violins and Orchestra," his Boston Pops commission for Nadja Salerno-Sonnenberg, Eileen Ivers, and Regina Carter, which earned him an ASCAP Deems Taylor Award for best composition for television broadcast; and Chris's second trombone work, "The Prague Concerto," recorded by the Czech National Symphony Orchestra and released on the Koch CD, Convergence.

In recent years he's probably spent more time working in orchestral settings than jazz clubs. In a major collaboration with Dave Brubeck, they wrote the score for "Ansel Adams: America," a multimedia composition featuring 100 Adams photos projected above the orchestra. Other recent commissions include "Quiet Heroes: A Symphonic Salute to the Flagraisers at Iwo Jima," narrated by Wilford Brimley; and "Travels in Time For Three" for orchestra and the ensemble Time For Three (two violinists and a double bassist), who will perform "Travels" at Carnegie Hall 3/8 with the Boston Pops.

"I think there's no way to end the confusion or to define what I do," Brubeck says. "I just feel really grateful I have different areas to play in and work in and compose in. The Brubeck Brothers Quartet, Triple Play, and my composing career all complement each other. Triple Play brings me back to my blues, jazz, and rock roots." A recent Los Angeles concert prompted L.A. Times reviewer Mark Swed to observe that the trio "stole the show with its flair and virtuosity" and its "rollicking good fun." "We have a blast," Brubeck admits, "and audiences love the joy we share playing together." That is plain to hear in the exhilarating performances--and delighted audience response--heard on the Zankel Music Center CD.

http://www.chrisbrubeckstripleplay.com/
Posted by Jazz Chill at 9:50 AM