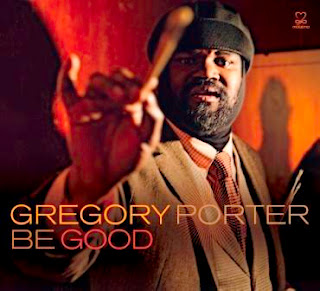 In the short fifteen months since Gregory Porter exploded onto the international music scene with his debut CD, Water (Motema Music, 2010), he has racked up a continuing stream of accolades and awards. Porter's Water garnered a 'Best Jazz Vocal ' Grammy® nomination (a rare feat for a debut recording), rocketed to #1 on both iTunes and Amazon in the UK, made significant sales inroads and has soared on to be included on an international array of year-end 'Best Of' lists for 2010 in several genres. The happy result is that, in less than a year and a half, these successes have created a formidable draw for Porter as an international touring artist.

To support the February 14 release of Be Good, Porter will kick off a series of US dates that will begin on March 15 at Boston's Regatta Bar, and will continue on through New York City (3/16 at the Highline Ballroom), Detroit (March 28 -31 at the Dirty Dog Jazz Cafe, Chicago (4/1 at the Mayne Stage) and will conclude in Pittsburgh (4/3 at the Cabaret at Theater Square.) Full show details are available on on both motema.com and on Gregory's website.

As the summer festival scene kicks into gear, Porter will also perform at various festivals around North America. Details on those performances are forthcoming.

On Be Good, (out February 14, 2012 on Motéma), Porter has crafted a work that not only meets, but is likely to surpass, the heightened expectations of the jazz and soul audiences eagerly awaiting his follow up to Water. Featuring Porter's winning combination of "outstanding original songs, erudite lyrics and social comment, top drawer musicianship and improvisation, and a voice to die for" (Jazz Wise), Be Good is a musical compendium of groove-driven delights, ranging from quiet ballads to up-tempo burners, from romantic charmers to powerful, blues-tinged anthems. Be Good finds Porter surrounded by the core of his powerhouse working band, with whom he recorded his Grammy® nominated debut, and who have performed with him for over three years now: Chip Crawford on piano, Aaron James on bass, Emanuel Harrold on drums, and Yosuke Sato on alto sax. Under the sure hand of producer Brian Bacchus, Porter and the band rise to new heights on Be Good, which is further fueled by richly emotional horn arrangements by Kamau Kenyatta, who produced Water and who continues to play an important role in Porter's sound. Kenyatta also performs on one track ("Painted on Canvas") and guest instrumentalists Keyon Harrold on trumpet and Tivon Pennicott on tenor sax are also featured throughout.

"Gregory is the real deal and a revelation in terms of new male jazz singers, but I think that his voice coupled with his songwriting may be the thing that leaves most listeners with their mouths open," says Bacchus "There have been many solid singer songwriters coming from under the jazz umbrella of the last 10 years that are mostly brimming with folk and country influences Gregory is the first that I'm hearing that is squarely coming out of a real classic soul bag (i.e. Bill Withers, Curtis Mayfield, Donny Hathaway) as a songwriter, but with both feet firmly planted in jazz's soil."

A disarmingly sincere performer, with a groove that never quits, a voice of incredible virtuosity and a seemingly universal appeal as a songwriter, Porter's lyrics often speak as dreams do, in the languages of image and emotion, communicating thoroughly though not always directly.His objective as a songwriter, he says, is "to create a sincere message about my feelings on love, culture, family and our human joys and pain." Even in conversation he leans toward the poetic: "Just like the song 'Painted on Canvas' says,'I'm 'made of the pigment of paint that is put upon' ...trying to be honest and organic in my colors that I show." Be Good clearly attains that goal, and also proves to have a wide palette of colors to show.

The CD's opening track,the song mentioned above, masterfully primes the canvas of Porter's sophomore release. Gentle as a bedtime story-teller, his vocals weave seamlessly in and around the warm tones established by his core band, enhanced by the sparkling threads of Kamau Kenyatta's tenor sax and Chip Crawford's impressionistic pianism."Be Good,(Lion's Song)" the leading single from the album, has been a favorite at Porter's live shows for some time,here finally making its much-anticipated recording debut.The upbeat tribute "On My Way to Harlem" percolates with the vibrant cultural energy of the Harlem renaissance figures that once walked the streets near St. Nick's Pub, where Porter's working band came together and where he finally solidified his conviction to record his first record in 2010. "I grew up in California and now I live in Brooklyn," explains Porter, "but even so, I feel that the spirit of the artists that came out of Harlem - from Duke Ellington to Langston Hughes - has so influenced my work that Harlem is as much a part of me as if I had lived there."

The soulful spirit of the '70s, epitomized by such artists as Lou Rawls and the Chi Lights, echoes forth in style on Porter's "Real Good Hands," a track that makes it clear that Porter is a complete romantic at heart. On the intriguing ballad, "The Way You Want to Live," a song of dangerous personal choices that he dedicated to Amy Winehouse during a performance at the Blue Note in New York just days after her untimely death, Chip Crawford's poignant touch on the keyboards is matched by Porter's fervent delivery. Next up, the band's unassuming, solid rapport underscores the tenderness of Porter's lyrics on "When Did You Learn?"

"Imitation of Life," the first of the three tracks on Be Good not written by Porter, is the title track from an Oscar-nominated 1959 film starring Lana Turner and Sandra Dee. Written by Paul Francis Webster and Sammy Fain, who also penned the Academy Award-winning "Love Is a Many Splendored Thing," and the Johnny Mathis hit, "A Certain Smile, "Imitation of Life" was originally performed by Earl Grant and has seldom since been recorded.

Porter, the youngest of a family of six raised in Bakersfield, California by a single mother who was also a minister, offers a show stopping and inspiringly heartfelt tribute to this clearly exceptional woman in "Mother's Song," emphasizing the extraordinary impact her love and fortitude has upon his life and work. "Our Love" which takes as its theme romantic love that succeeds despite the odds and in spite of naysayers, sustains the CD's mellow mood until Porter shakes things up completely with the scat-inflected, high energy "Bling Bling." Next, Porter delivers perhaps one of the hottest and grittiest versions ever of Nat Adderly's classic, "Work Song," a hard driving blues and jazz standard that has been recorded by vocalists as disparate as Nina Simone, Bobby Darin, Sammy Davis, Jr. and Johnny Rivers. Porter closes the proceedings with an a cappella version of "God Bless the Child," that is as understated as a prayer and as comforting as a lullaby.

In review after review, critics are inspired to comment on Porter as a new "king' of jazz," and a "leader of the pack," a performer of extraordinary presence who has been compared with the greatest of the greats, such as Joe Williams, Nat Cole, Donny Hathaway, and Marvin Gaye. As musically solid as his recordings are and as powerful and honest as Porter's magnificent voice is, it may just well be the brilliance of his poetry and the unguarded depth of his emotional delivery that is most fueling his rapid rise to fame. While fans will certainly be tempted to interpret deeply autobiographical messages amid the stories of love and loss that Porter has composed for Be Good, Porter is quick to point out that he is more painter than photographer. "My songs may start from a place of personal experience," he explains, but he uses his poetic license freely. "I try not to impose any particular perspective on the music. I want listeners to be affected each in his or her own way, and moved as much by what can be read in between the lines as what the lyrics say."

Crowned as "....the next big male vocal jazz star" by Allmusic.com, Gregory Porter was born in Los Angeles, raised in Bakersfield, and now lives in the Bedford-Stuyvesant area of Brooklyn. He got his start singing in small jazz clubs in San Diego, where he lived while at San Diego State University (which he attended on a football scholarship as an outside linebacker, until sidelined by a shoulder injury.)

His first studio experience resulted in his being featured on Hubert Laws' Remembers the Unforgettable Nat King Cole (on "Smile"), a particularly apt start for a young man who, as a child, not only used to sing along to the Nat King Cole records his mother would play, but who would go on to impress theater audiences with a deeply personal one man show, Nat King Cole and Me. That show, which ran for two months at the Denver Center for the Performing Arts, was preceded by Porter's work in "It Ain't Nothin' But the Blues." Although he'd only had minimal prior theatrical experience (in the Doo Wop musical "Avenue X"), Porter eventually was cast in one of eight lead roles when the play opened in San Diego, and eventually followed it to Off-Broadway and then Broadway theater, where the New York Times, in its 1999 rave review, mentioned Porter among the show's "powerhouse line up of singers." "It Ain't Nothin' But the Blues" went on to earn both Tony and Drama Desk Award nominations that year.

In 2009, Porter signed with Harlem-based label Motema Music, releasing his debut CD, Water, in May of 2010. Water has earned Porter incredible accolades from jazz and soul media alike.

"Gregory Porter has most of what you want in a male jazz singer, and maybe a thing or two you didn't know you wanted." - New York Times

Two videos off of Water have been released, for the songs "Illusion" and the politically charged "1960 What?" Both have received significant airplay around the country, on such national outlets as VH-1.
Posted by Jazz Chill at 11:14 AM